Did you know that May is National Salad Month? Yeah, me either. I like it though.

It’s a strange memory to have, but I clearly remember the first time I ever ate a salad. I was maybe three or four and my mom had made one for herself. I remember leaning over her bowl and asking “what’s that?” to every ingredient. Eventually when I was convinced the ingredients were satisfactory enough, I asked to taste it. However, being the picky kid that I was, I’m fairly certain I tried each ingredient separately though. 😊 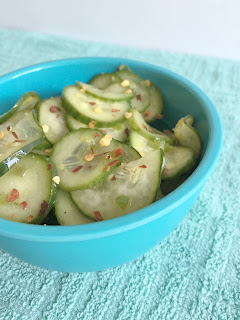 But, I deemed it tasty enough and began asking for salads for dinner. I didn’t venture too far away from the standard lettuce, carrots, tomato and cucumber versions for quite some time, but I was rather brave (for a picky kid) when it came to salad dressings. I quickly found that there wasn’t really a salad dressing I disliked. 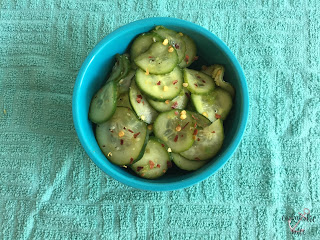 I believe I’ve mentioned this before, but as a kid, I ate a lot of cucumbers in the summer. My mom had two ways of preparing them – with vinegar, onions and a bit of sugar or with sour cream. It’s funny to say (write?) but it took a long time before it dawned on me that either of those dishes were considered a salad.

So why all of this talk about salad? Well, as I mentioned initially, it’s National Salad Month and that’s what #FoodieExtravaganza is celebrating. Foodie Extravaganza is where we celebrate obscure food holidays or cook and bake together with the same ingredient or theme each month. This month Camilla of Culinary Adventures with Camilla is hosting. She encouraged us: “Let’s celebrate all things salad. Green salads, pasta salads, potato salads…whatever you want!”

Making a cucumber salad is still one of the first recipes I go to as soon as the weather starts to warm up. I’ve tried a ton of different varieties, but there is always room to try more, which I did this month by adding cilantro and lime. 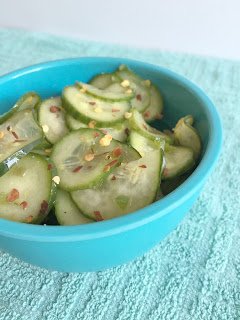 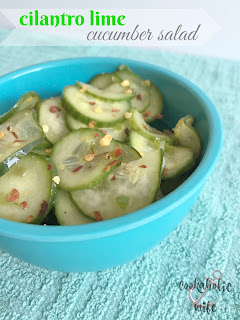 Posting day for #FoodieExtravaganza is always the first Wednesday of each month. If you are a blogger and would like to join our group and blog along with us, come join our Facebook page Foodie Extravaganza. We would love to have you! If you’re a spectator looking for delicious tid-bits check out our Foodie Extravaganza Pinterest Board! Looking for our previous parties? Check them out HERE.