July is gone? How did this happen?

I am in shock that it is already August. In the past couple of years I've noticed that the even years seem to have the months fly by, but the odd numbered years, they pass along at a much more normal pace. Even if this is just something in my head. it's August! Summer is nearly over! 😢

I decided that I wanted to start a monthly recap post to share with all of you to give you an update of what's going on with my life and the blog.

1. How was your fourth of July? We stayed home. My area is really popular for setting off their own fireworks, and not the cheap kind either. They set off the ones that are illegal to buy in Maryland and look like the ones you would see at a professional display. I live in a cul-de-sac and my neighbors set them off in the center of it, with the firework debris falling all over our house and cars and making it sound like we're in the middle of a war zone.

I actually really like fireworks, but I don't like them going off in my front yard and terrifying my cats, who shake and pant for the duration of it as well as a few hours afterwards. I happened to post that I wish the community would set them off instead of individuals on the local Facebook page. It appears that was a bit of a mistake.

I was called unpatriotic, egotistical, entitled and lots of other choice insults. I was told to kill my cats if they were scared, that I was stupid for buying a new car, that my property doesn't matter, that I ruin holidays for everyone, and my favorite, that fireworks aren't hot. So that was rather enlightening. I had planned on becoming more involved in the community, but after that overreaction to the suggestion of community fireworks, I pretty much lost all interest in talking to anyone in my area ever again. 😩

2. It has been the rainiest July on record in Baltimore...ever. The airport has reported over 15 inches of rain for the month, surpassing the previous record of just over 11 inches in 1889. That's insane! It has rained so much that I've debated on starting to take my Season Affective Disorder medicine again. I miss you, bright yellow ball in the sky bringing warmth and light.

3. My mom's annual pool party is always held the 3rd weekend in July, but Mother Nature had other plans. We had to reschedule for August. It poured that whole weekend so I ended up baking a couple of loaves of bread. The double chocolate zucchini was shared with you yesterday and the peach pecan is coming soon! I had thought about making rye or ciabatta, but they both required ingredients I didn't have and it was raining way too hard to venture out for them. 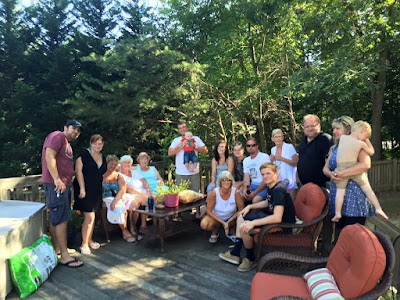 4. Floor polish is the devil. I've never lived in a house with real hardwood floors before, until we bought this house. I spent hours looking up online the proper way to care and clean them. Nearly every site has conflicting information over the last. I had started off with polishing them and then using a microfiber cloth and cleaning solution. After about a year my floors looked terrible and I couldn't figure out what was going on.

And then on page 17 of the Google search results, I found out that you're not supposed to use hardwood floor polish on the type of floors I have. Over the next week, Tom and I tried every solution to get the polish off the floors. We found that strapping a scrubbing brush to a hand sander with electrical tape and spraying the floors with a vinegar/water solution worked the best without your arm falling off immediately. 700 square feet of floor was polish. In three weeks, we've only managed to remove about half of the polish. I want to cry just thinking about it. Luckily, it does come off, but it requires so much elbow grease even with the sander and the light has to hit at the right angle....it's a nightmare. My new goal is to get the remainder off before everyone comes over for Thanksgiving. I'd also like to burn every bottle of hardwood floor polish out there, but that's another story.

5. I now clean my floors almost solely with vinegar, water and a microfiber cloth. I have a Swiffer Wet and will go over the high traffic areas with that, but any spots that appear are attacked with vinegar. Of course, the unpolished areas look great now. Go figure!

6. We got a new kitten. Well, we really got him back in June. His name is Hunter and he is a rescue kitten. I quickly realized we were very blessed with Itty as a kitten. Hunter is a holy terror. He destroys everything he can, attacks Gidget and Itty and 100% does not calm down. His destruction toll is already into the hundreds of dollars. I'm hoping he grows out of the crazy-kitten stage really soon! 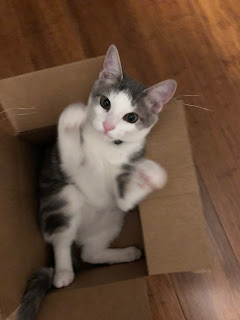 7. The beach. At the end of last month I had a few days off and my cousin and I went to visit my aunt and uncle at their beach house. The weather was nice for the first day and then was really hit or miss for the remainder, but we still had a good time. Sunday morning I walked up to the beach a little after sunrise and got some really good pictures. While it's simple, the visit to the beach left me feeling really inspired to start writing again. (I think in passing I mentioned that I'm writing a novel) 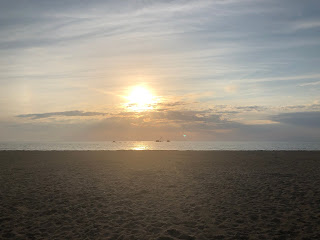 8. I decided earlier this week that I'm going to take the plunge and switch to WordPress. I've been blogging for nearly a decade and I've thought about it numerous times, but I keep having issues with Blogger and my theme and my brother in law has offered to do the migration for free, which I can't really pass up. I'm nervous and excited. We'll probably stay in draft mode throughout August so I can make sure everything is how I want it and then the switch will go live in September. If you've done this before, share your experience with me in the comments, please!

9. Mindless television. I'm about 3 seasons behind, but I was randomly scrolling through Netflix looking for something to watch that was relatively cheerful and required little to no brain capacity. I ended up on the Hallmark Series, When Calls the Heart. And I binge watched 4 seasons in 10 days. I'm completely in love with Jack and Elizabeth and impatiently waiting for season 5 to become available. Unfortunately I also saw all the season 5 spoilers, but I still want to watch. I'm also following both actors in Instagram now and like them even more.

10. Food - we tried steaming our own crabs and they turned out pretty good! There's finally a snowball stand nearby and I think I'm going to eat my weight in egg custard snowballs with marshmallow before the summer is out. My tomato plant has finally put off a full sized tomato. I'm still waiting for it to turn red, but hey, progress! 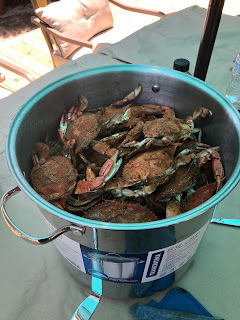 I think that's a pretty good recap of how my July went. How was yours? Check back at the end of August for a recap on that! I'm going to try really hard to keep this monthly recap thing going.