Lighter Green Bean Casserole is a healthier take on the classic Thanksgiving side dish. Made with fresh green beans and mushrooms, milk and cheese instead of "cream of" soups.

Update: This recipe was originally shared in November 2016 as part of a Holiday Side Dish event. The recipe and photos were improved as of November 2020.

As a kid, I wasn't a big fan of green bean casserole, or traditional Thanksgiving foods at all, for that matter. But, that's over with and now it's one of my favorite holidays and I love preparing the dishes and hosting everyone. Previously, even though I wasn't a fan, I'd make the traditional version of green bean casserole, but one year I got creative and wanted to see if I could make a lighter version, which is how this recipe was born. Now I serve it for every Thanksgiving.

How is this recipe lighter?

Traditional green bean casserole, created by Dorcas Reilly in the 1950's, featured canned green beans, cream of mushroom soup and french fried onions. This recipe is made using fresh green beans and mushrooms, sour cream, flour, milk and seasonings for a lighter dish. Instead of fried onions, the casserole is topped with a cheesy breadcrumb mixture.

As stated above, this recipe was originally created for a Holiday Side Dish event. The links below are recipes made by fellow bloggers. 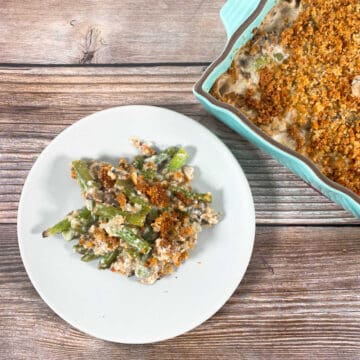 To save on dishes, you can wipe out the skillet between each step.  If you'd like a cheesier casserole, top it with shredded gruyere or mozzarella and the bread crumb mixture.  For step by step tips on blanching green beans, view my How to Blanch Green Beans recipe.

Keyword green bean casserole, side dish, thanksgiving
Did you make this? I want to see, soMention @CookaholicWife or tag #cookaholicwife!