While summer will forever be my favorite season,  I can admit to liking fall because of the influx of apples. With apples comes apple cider which is rather far up there on my list of things I absolutely love. You have pumpkin spice people and then you have me, an apple cider lover.

When I saw this recipe in the Smitten Kitchen Cookbook I decided I didn't care that I had a temperamental stove or only one weekend to pull this off for the cookbook challenge (the ladies on the cooking board I frequent decided we could start a challenge where we made recipes from a chosen cookbook and share them on the board/on our blogs), I was going to make them. 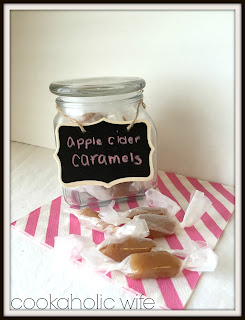 Directions:
1. Add the apple cider to a saucepan and bring to a boil over high heat. Allow to boil down to a thick syrup, reducing down to ½ to ⅓ cups of liquid, over the course of about 40 minutes. Stir occasionally.
2. Line the bottom and sides of an 8x8 metal baking dish with two sheets of parchment paper going in opposite directions.
3. Combine the cinnamon and salt together in a small dish, set aside.
4. Once the apple cider has finished reducing, remove it from the heat and stir in the butter, sugars and cream. Attach a candy thermometer to the side and return the pan to the stove, over medium-high heat. Allow it to boil until it reaches 252 degrees, keeping a close eye on it.
5. When it reaches 252 degrees, immediately remove it from the heat and stir in the cinnamon-salt mixture. Pour the caramel into the prepared pan and allow it to sit for at least 2 hours, until it is cool and firm.
6. Use the parchment paper to lift the cooled caramel from the pan and transfer to a cutting board. Use a well oiled knife to slice into the caramel, making 1x1 inch squares. Each caramel can be placed on a 4-inch square of wax paper and wrapped up. 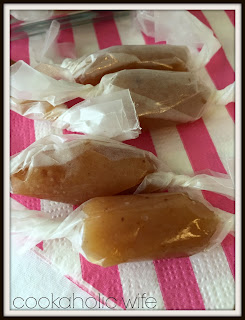 Caramels stay good in an airtight container for two weeks. 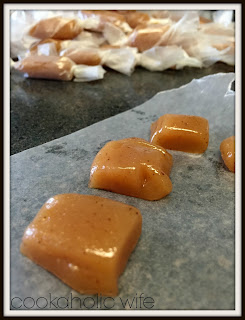 I dare you to eat just one.