#CranberryWeek is continuing right along!

Do have a cast iron skillet? Do you use it often? For some reason I never think to use mine unless a recipe specifically calls for it. Years ago, I entered in a random raffle on a message board site to win a stockpile of really cool stuff from Le Creuset and other sponsors.

A couple of months later I received an email asking me if I was going to claim the prize because if not, they were going to determine another vendor. The first email saying I was the winner never got to me, but I'm sure glad I received the second one! 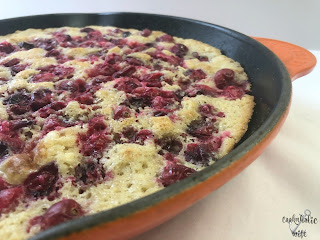 The skillet posted in these pictures was just one of many things that I received as part of that prize pack. Isn't she pretty? Anyway, if you are a frequent cast iron skillet user, could you send me some of your best recipes? I'd appreciate it!

If you're looking for a quick dish to throw together for company (either for breakfast or as dessert), this is a great choice. The batter is mixed up quickly, topped with sugared cranberries and popped into the oven to bake. I love how simple it is, allowing for the tartness of the cranberries to shine through. 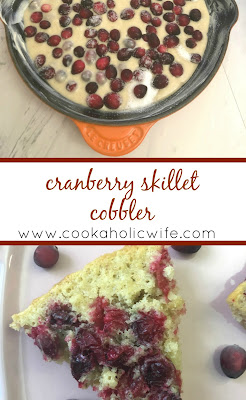 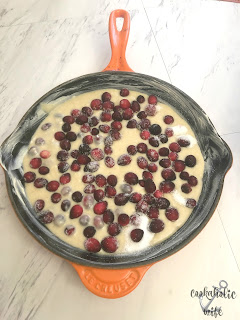 This reminded me more of a stuffed skillet pancake than it did a cobbler, but that's really just semantics.  A slice of this and a cup of coffee? Sign me up! 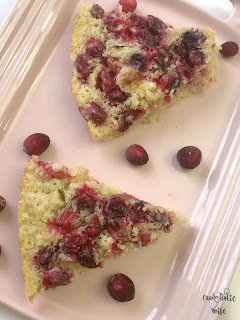 See all the other recipes being shared today as part of Cranberry week - follow #cranberryweek for all the tasty cranberry creations: