When I decided to remake some recipes, I wanted to get the current seasonal ones out of the way first. If you're not a fan of pumpkin, my apologies as to how many pumpkin recipes, remakes or otherwise have been shared recently.

The original recipe was in a really weird format, so I decided to remove it entirely and just start over again. 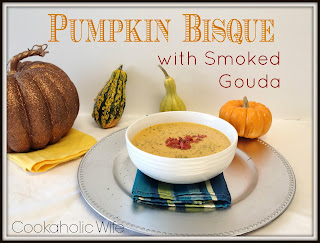 Directions:
1. Heat a dutch oven over medium high heat and add the chopped bacon. Cook, stirring frequently until bacon is crispy. Remove with a slotted spoon to a paper towel to let drain.
2. Reduce the heat to medium and add the onion to the dutch oven. Cook for 3-5 minutes then add in the garlic and cook for 1 minute more.
3. Stir in the chicken broth, pumpkin puree, salt, nutmeg and pepper. Bring to a boil, then reduce the heat to a simmer and allow to simmer, uncovered for 10 minutes. Remove from the heat and cool slightly.
4. Transfer the soup mixture into a blender and puree until smooth. Return to the dutch oven and stir in the cream over low heat, allowing to heat through. Then stir in the cheese until fully melted.
5. Serve, garnished with crumbled bacon and fresh parsley. 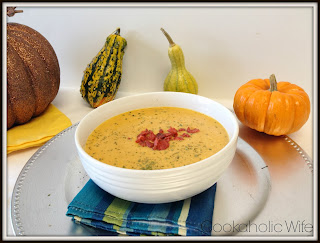 For the original recipe I didn't used a smoked Gouda cheese which left a little bit to be desired in the recipe, but for this remake I used smoked Gouda. I think it brought out the pumpkin and bacon flavors very nicely.

Have I mentioned enough times now that I never used to like the taste of pumpkin? If not, there it is again. When I came across this recipe in the November edition of Taste of Home magazine, I thought it not only sounded like a fun recipe to try, but one that would look really cute in tall shot glasses as appetizers for Thanksgiving.

Last year when I hosted Thanksgiving, I waited until that day to make them. I wanted to be more organized this year and give all of you a chance to see what I'm planning on making before the actual holiday.

I wasn't sure what I was going to think of this soup but I thought it was pretty good. The grocery store was out of the usual Gouda we buy and the one I had to purchase didn't have as strong of a smoked flavor. I think it would have really added more depth to the soup. Tom couldn't figure out whether he liked or disliked the recipe. Either way, I'm definitely planning on making it again with the usual Gouda cheese to see how it tastes then.