Every year around the holidays my uncle is given a 20 pound turkey from his work. It's just him and my aunt so they have no use for a jumbo bird like that. After the first year I started hosting Thanksgiving my aunt asked me if she could start making the turkey to use up the big bird she was getting for free.

It might sound silly, hosting a holiday and not making the star of the show, but it's allowed me to focus on other recipes, like the side dishes and desserts. However, it doesn't really allow for me to share turkey recipes with you, now does it?

So this year I decided the second that I found turkeys in the store I was going to buy one and make a turkey recipe. Tom definitely wasn't complaining when I told him we could have up to four Thanksgiving like meals this year.

I love the combination of orange and rosemary so I couldn't wait to make this recipe. The original recipe is doubled and used on a 12 pound bird but buying it the last week of October didn't exactly provide me with a lot of turkey options. I was only able to find a 6 pound bird, which turned out perfectly. We ate one of the breasts for dinner that night, I used the half of the other one in a second dish the next night and then we used the thigh and remainder of the breast to make a soup recipe the third night.

I have a sneaking feeling I might be turkey'd out by the time Thanksgiving finally rolls around, but it's a sacrifice I'm willing to make to share turkey recipes with you. 🙂 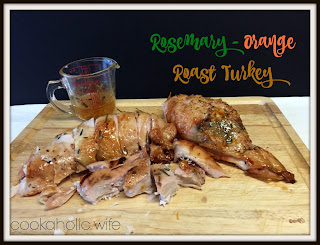 Directions:
1. Combine orange zest, rosemary, salt and pepper together in a small bowl.
2. Remove the giblets and neck from the turkey. Place the turkey in a roasting pan and gently work your fingers under the skin to loosen it.
3. Rub the orange zest mixture under the skin, cover the turkey and refrigerate for 8 to 12 hours.
4. Combine the ingredients for the glaze in a small saucepan and bring to a boil. Reduce the heat to medium low and allow the mixture to simmer for 3-5 minutes or until it thickens and reduces.
5. Remove the turkey from the refrigerator and allow to come to room temperature for 1 hour. Pat dry with a paper towel.
6. Preheat the oven to 425.
7. Bake the turkey for 15 minutes or until lightly browned. Add the water to the roasting pan.
8. Reduce the oven temperature to 375 and cook for 30 minutes. Divide the glaze in half and brush half on the turkey. Return to the oven to cook another 30 minutes to 1 hour, or until the internal temperature of the turkey's thigh reaches 165 degrees.
9. Remove from the oven and tent loosely with foil. Allow the turkey to cool for at least 30 minutes before slicing. Drizzle the remaining glaze over the turkey. We both agreed I probably could have left the sauce at the original recipe amount since it was SO delicious!