Southwest Corn and Potato Chowder is a hearty dish bursting with fresh flavors from the corn and bell peppers to the seasonings. Topping this chowder with cheese and crumbled bacon makes it even better!

A couple of weeks ago I saw that a local farm stand was starting to offer produce boxes before their CSA season. During all of this we've really made much more of an effort to support local businesses. I immediately signed up for the produce box and got to thinking about what I could make with the ingredients. Initially, corn fritters were planned on the menu, but the day that I went to make them it was chilly. I looked at the produce box ingredients, what we had in the fridge and quickly decided I could make a corn chowder with southwest flavors that would surely warm us up on that chilly day.

WHAT IS CORN AND POTATO CHOWDER?

A chowder is a type of soup or stew, prepared with milk or cream and typically containing corn, potatoes, and onions. A chowder can easily be made with many ingredients that you have on hand. For example, we didn't have any milk left so I used a can of evaporated milk instead. A traditional corn chowder wouldn't include bell peppers, but mine were nearing the end of their life. So I changed up the seasonings for more of a southwestern flavor and added in the bell peppers. COOKAHOLIC WIFE TIP: HOW TO GET CORN OFF THE COB?

I don't know about you, but getting corn off of the cob can be such a hassle. But I've found an easy way to do it! WANT TO SAVE THIS RECIPE FOR LATER? PIN IT TO YOUR FAVORITE PINTEREST BOARD AND FOLLOW ME AT COOKAHOLICWIFE FOR MORE DELICIOUS RECIPES! 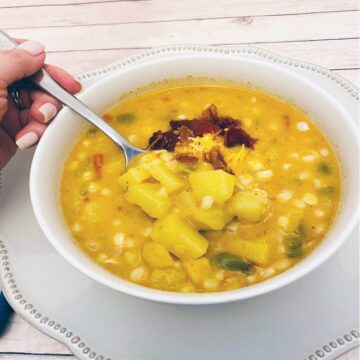