Squash is still a culinary mystery to me. I never had any form of it growing up. No zucchini or summer squash, no butternut, acorn or spaghetti varieties either. It wasn't until I first made ratatouille back in 2010 that I ever had zucchini.

I slowly began incorporating zucchini and yellow squash into recipes since they didn't have much flavor. It was still years later before I ever tried butternut squash and quickly realized what I had been missing, but the other squashes remained in their bins at the store, me not giving them a second glance.

After watching an episode of The Kitchen on Food Network I realized how versatile squash could be and decided to finally break out of my squash fear and try other ones.

Spaghetti squash seemed like the easiest choice and I still held out hope that maybe I could convince Tom to like a vegetable that looked like pasta. 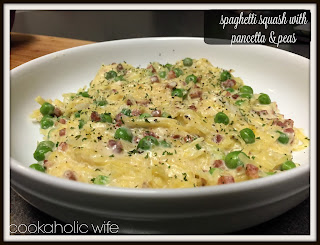 Directions:
1. Preheat the oven to 400 degrees. Line a large baking sheet with foil.
2. Slice the squash in half lengthwise. Remove any seeds with a spoon and then place cut side down on the baking sheet. Roast for 25-35 minutes or until tender.
3. Allow to cool slightly, then use a fork to scrape out the strands. Place in a bowl and set aside.
4. Heat a medium skillet over medium heat and add the pancetta. Cook for 6-7 minutes, stirring frequently, or until crisp on all sides. Transfer with a slotted spoon to a paper towel lined plate.
5. Add the shallot and thyme to the skillet and cook for 2-3 minutes or until the shallot has softened, the stir in the white wine and scrape up any bits from the bottom of the pan with a wooden spoon.
6. When the wine has mostly evaporated, pour in the cream and add the nutmeg. Season lightly with salt and pepper. Increase the heat to medium high and cook, stirring occasionally until the mixture has thickened slightly.
7. Stir in the peas and parmesan and cook until the peas are warmed through, about 2 minutes. Remove from the heat.
8. Stir the squash and the pancetta into the sauce and put back over the heat for 1 minute more, just until everything is warmed through.
9. Divide between four bowls and sprinkle with parsley. Season to taste with salt and pepper. 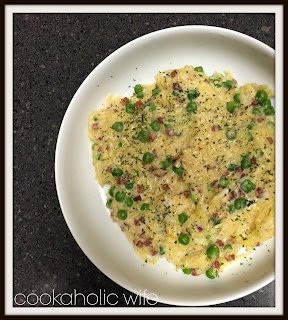 As you might have expected, the resident vegetable hater had no interested in a dish where a vegetable replaced his beloved carb riddled pasta. Well, I tried. And I surely enjoyed the dish.

An alfredo style dish like this isn't something that you can enjoy every day with the high calorie and fat count and carb overload, but using spaghetti squash instead seriously cuts down on the carbs and calories, since squash has something like 20 calories per cup and pasta averages 220 calories per cup.