My coworkers are huge fans of cinnamon rolls. After bringing them in once, they've asked me to make as many varieties and versions as I can come up with and to please bring them in on Monday mornings.

Not one to disappoint, I looked through some saved recipes I had but didn't find anything that really appealed to me. Then I took note of the excess of apples sitting on the counter and wondered if I could saute them up and put them inside a cinnamon roll along with the typical cinnamon + sugar filling. 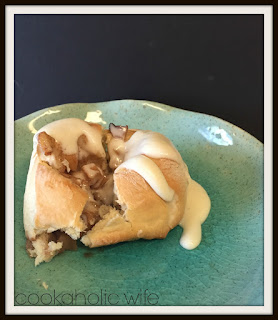 Directions:
1. In the bowl of your stand mixer, combine water, sugar and yeast and allow to stand for 15 minutes.
2. Meanwhile, cut 2 rounds of parchment paper to fit in the bottom of 2 8-inch round cake pans. Spray the parchment and sides of the pans with non-stick cooking spray.
3. In a medium bowl, toss together the apples with the brown sugar and cinnamon. Transfer to a medium saucepan and add the butter. Cook over medium-low heat for 3-5 minutes or until the apples have softened. Allow to cool slightly.
4. Preheat the oven to 400 degrees.
5. Add the salt and butter to your stand mixer bowl and mix until combined. Switch to the dough hook and add in the flour, a little bit at a time until a soft dough forms. If needed, add more flour by the tablespoon until it pulls away from the bowl and is tacky but not sticky to the touch.
6. On a lightly floured surface, divide the dough into two evenly sized pieces. Roll each piece out into a rectangle, approximately 9x11. Leaving a ½ inch border, spread half of the apple mixture down each piece of dough lengthwise. Tightly roll up each rectangle lengthwise. Cut each roll into 6 evenly sized rounds with a serrated knife.
7. Arrange each set of 6 dough slices into the prepared cake pans. Let rest for 5 minutes.
8. Bake for 15-18 minutes or until the tops are golden.
9. Meanwhile, prepare the glaze. Combine butter and cream cheese together in the bowl of a stand mixer, then add in the maple syrup and vanilla. Add in the powdered sugar ½ cup at a time until it reaches a thick glaze. If the mixture is too thick, thin it out with milk 1 tablespoon at a time.
10. Transfer the glaze to a pastry bag and drizzle over the hot cinnamon buns or spread over the buns with a spatula. Serve warm. 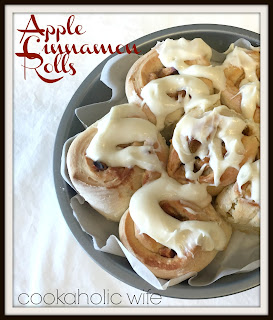 Diced apples in cinnamon rolls is something you need to experience in your life. I can't believe I didn't think of this sooner. I went light on the apple filling, worried that by putting too much in the rolls they would fall apart, but they didn't. You could probably add in another half of a medium sized apple if you were really wanting the apple to stand out even more.