Bacon Cheddar Cheese Souffle is not nearly as difficult to make as you may think. Just a few ingredients and your oven does all of the work creating this perfect dish for brunch or breakfast. A souffle is not nearly as hard of a dish as some people think it is to make. Sure, you need to white the egg whites into stiff peaks and then gently fold them into the rest of the mixture to get that nice rise on it while it's baking, but a recipe only calls for a few ingredients and egg whites can be easily whipped to perfect in a stand mixer or with a hand mixer. (There's no hand whisking egg whites for this girl, ever).

I chose to use the Bacon Cheddar Shredded Cheese from Cabot for this recipe because I was impressed with how strongly the bacon flavor comes through in the cheese. I thought that it might be pretty mild, but that is not the case at all. When I served one of these to Tom he asked me where the bacon was because he couldn't find any in the ramekin. 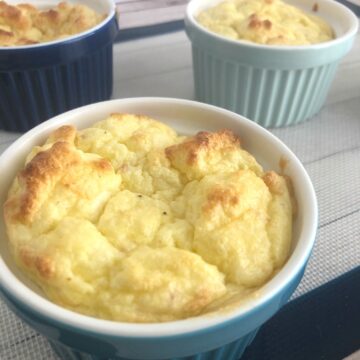 NicholeL
Bacon Cheddar Cheese Souffle is not nearly as difficult to make as you may think. Just a few ingredients and your oven does all of the work creating this perfect dish for brunch or breakfast.
No ratings yet
Print Recipe Pin Recipe
Prep Time 10 mins
Cook Time 30 mins
Total Time 40 mins
Course Breakfast, Brunch
Servings 4

Depending on your oven and the temperature in your kitchen, the souffles may deflate within a few minutes. There is nothing wrong with this and it doesn't affect the texture or taste. OMG these souffles are SO good! I hope you'll try out this recipe and taste them for yourself!