What is Sweets Week? Just something I created since I have an abundance of sweet recipes to share with you. I try not to overload you with sweets each week and try to keep a pretty even amount of savory and sweet recipes, but it would take me forever to share everything with you. Since blueberries are in season right now, I wanted to share this ASAP. Check back later in the week for another blueberry recipe!

We really aren't beer drinking people, but ever so often I'll come home and find there are bottles of beer in the fridge. Tom apparently occasionally likes to have a beer and is incapable of buying them in quantities of less than 12.

In this particular instance, I came home and found Samuel Adams Summer Ale pack. He was drinking one of them, called Porch Rocket, which I tried and really liked. Of course, all of those had already been consumed. I moved around the bottles, passing up something with rye, something Belgium and my eyes landed on Blueberry Hill Lager. I was intrigued. Blueberries in beer?

So I tried it. It smelled like blueberries but didn't taste a damn thing like them. I hate false advertising. Now I needed to figure out what to do with 11.5 ounces of an opened bottle of beer. The idea of "blueberry beer bread" immediately came to me. I searched for recipes and found that no one had made a bread using this particular beer so it became definite that this was what I needed to do. 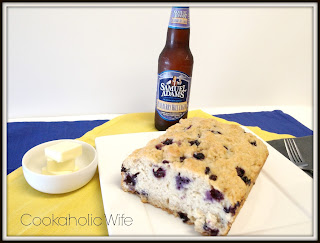 Directions:
1. Preheat the oven to 350. Spray a 9x5 loaf pan with non-stick cooking spray.
2. In a large bowl, combine the flours, baking powder, salt and sugar. Add the vegetable oil and beer. Stir until the flour is incorporated. The mixture will be lumpy.
3. Gently stir in the fresh and frozen blueberries then spread evenly into a the loaf pan. Sprinkle the sugar packet over the dough.
4. Bake for 1 hour or until a toothpick inserted in the center comes out clean. Let cool on a wire rack for 10 minutes, then turn out the bread onto the rack and let cool completely.

I'm pretty sure this is the most decisive recipe I've ever made. I thought of blueberry bread, I found a blueberry bread recipe, I immediately went into the kitchen and made said bread. An hour later, I had the bread. It doesn't get better than that.

I found this to be a little bit on the sweet side for what I expected to be a savory bread, so I cut the sugar amount down from ½ to ¼ cup in the recipe above. The beer flavor barely came through with the full amount of sugar, but the second time with ¼ cup, it was slightly more pronounced. Since we're not fans of the beer, I'm debating on using the last bottle of it in the fridge to make another loaf or finding a new recipe. 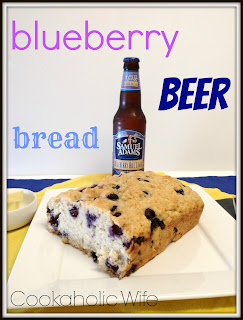 What do you think?

This post linked at: Time to Sparkle & Tuesday Talent Show