New Orleans Oyster Dressing is a hearty dressing (stuffing) made with bread, cajun seasonings, veggies and oysters. It's a great savory side dish for Thanksgiving or Christmas.

I've always been a classic stuffing kind of girl. Celery, onion, bread and seasonings is all I need to enjoy a heaping spoonful of stuffing on Thanksgiving. But it's common in the Northeast and south to add oysters to stuffing. Then it's usually called dressing. Regardless of what type of bread you use and what you put in it, stuffing (or dressing) is a must for any Thanksgiving table.

I made this New Orleans Oyster Dressing to go along with a Cajun Roasted Turkey Breast when we decided to have a mini New Orleans style Thanksgiving last weekend. We all thought it was pretty tasty! But my aunt, who I invited over to grab a plate of leftovers, absolutely loved it.

WHAT'S THE DIFFERENCE BETWEEN STUFFING AND DRESSING?

Stuffing (or dressing) is a classic American side dish on Thanksgiving. It's typically made from cut up pieces of bread mixed with cooked celery and onion. Seasonings usually include salt, pepper and sage. Sometimes thyme and rosemary are included. The mixture is soaked with a stock or broth and baked.

The difference between the two is mainly geographical. Those above the Mason Dixon line tend to refer to it as stuffing and those below refer to it as dressing.  Dressing is always baked in a baking dish. Stuffing can either be baked in a bird or outside of the bird.

My family is the abnormality to all of this. We're below the Mason Dixon line (barely, as it runs across the top of Maryland) but we call it stuffing. Even if we don't stuff it in a bird to bake it. Baking stuffing in a turkey grosses me out to no end, so you're never going to see that here on Cookaholic Wife. (In case you were curious) DO YOU NEED TO USE FRESH OYSTERS?

Oysters are generally available year-round. But in Maryland, we say that they are the best in months that end in an "R", meaning September through December. Since Thanksgiving falls in November, it's pretty easy to find fresh oysters if you're not in a land-locked state. That statement came back to bite me in the butt as I was buying ingredients for this recipe. The grocery store had fresh oysters but they needed to be shucked. Which I was not interested, nor did I have the time, to do. So, no, you don't need to use fresh oysters in this recipe. If you can find them, go for it! If not, the canned ones work as well.

CAN YOU FREEZE OYSTER DRESSING?

Yes! Like any good stuffing or dressing recipe, it can be made in advance and either kept in the fridge (4 days max!) or frozen for up to a month. My make-ahead celery and onion stuffing is a huge time saver for Thanksgiving. A week or two before the holiday I make it, as well as my cranberry sauce and freeze them.

To cook stuffing or dressing from frozen, let it thaw in the fridge for a day, then bake it as stated below.

The oysters add a slightly salty seafood flavor to the stuffing. Traditional stuffing can be plain unless you add a bunch of herbs to it for flavor. In this version, the oysters add the salt and amp up the flavor.

The seasoning. This New Orleans Oyster Dressing is flavored with cajun seasoning as well as hot sauce. If you can't find cajun seasoning, or don't want to make your own, creole seasoning can usually be found in the spice aisle at the grocery store. WANT TO TRY THIS RECIPE? SAVE IT TO YOUR FAVORITE PINTEREST BOARD. 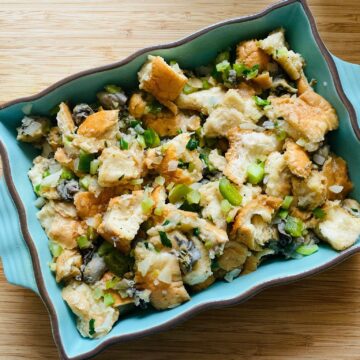 Bread: any type of bread can be used. I bought a loaf of Italian bread, cubed it and toasted it at 350 for 10 minutes. Prepared bags of stuffing mix or even lightly salted croutons can be used. Salt and Pepper: the oysters and their juice can easily make the dressing too salty, so taste it before you bake it. The hot sauce and cajun seasoning also add salt to the recipe. We like things pretty salty and I added ½ teaspoon salt and 1 teaspoon pepper. Note: nutritional value is based off 6 servings.