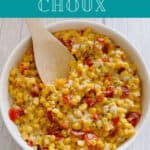 Corn Maque Choux is a traditional Louisiana dish made with corn, bell peppers, onions, bacon and cajun spices. Milk or cream is added, making the dish similar to a creamed corn.

Update: This recipe was originally shared in November 2019. The photos and recipe have updated and republished in February 2023.

When I first started cooking I came across a recipe for Corn Maque Choux in an Emeril cookbook that my mother in law gave us. I made the recipe once and knew it would be a repeat side dish.

What is corn maque choux?

Corn Maque Choux (pronounced corn mock shoe) is a Louisana dish, likely a mixture of Creole and American Indian cuisines. Corn, bell peppers and onions are cooked in bacon grease and seasoned with Creole or Cajun spices before flour and milk (or cream) are added to thicken up the side dish.

First, cook slices of bacon in a skillet. Once crispy, remove and crumble bacon. Reserve about a teaspoon of bacon grease to cook the corn, peppers and onions.

Then add the butter, corn, peppers and onions to the skillet. Cook over medium heat for 8-10 minutes until vegetables are softened.

Next, add in the seasoning and flour, stirring to coat. Once fully stirred in, add the milk.

Finally, let the mixture simmer for 3-5 minutes. Once mixture begins to thicken, remove from the heat. Stir in the crumbled bacon and serve. Optionally, garnished with fresh or dried parsley or chopped green onions.

Do you use fresh or frozen corn in maque choux?

Can you freeze corn maque choux?

Yes, cook and cool completely then transfer to an airtight container and freeze up to 2 months. To cook from frozen, allow to thaw in the fridge then heat in a skillet for about 10 minutes over medium low heat until warmed through.

Does corn maque choux have tomatoes?

Depends on the recipe - some recipes will include stewed or diced tomatoes and it's omitted from others. 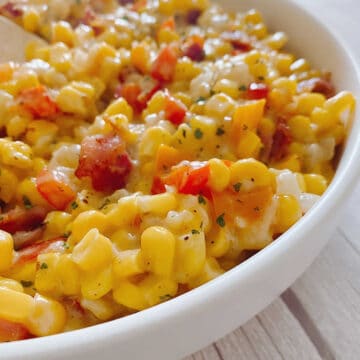 Milk: We keep 2% milk in the house and I use this if I don't have any cream on hand. If you don't have either, but have cream cheese, cut 3 oz. into small pieces and stir it into the mixture until it melts. You can skip the flour in this case. Cajun Seasoning: Cajun and creole seasoning are pretty interchangeable if your grocery store only carries one.