Sauteed Green Beans, Mushrooms and Cherry Tomatoes is an easy to make side dish that highlights the flavors of the vegetables and pairs greatly with a variety of proteins.

Side dishes are my downfall. I can look through cookbook after cookbook, website after website and pick out hundreds of them that I’d love to make but when it comes to actually choosing a side dish to pair with a protein I hem and haw forever trying to choose one that will work well with it.

It’s really not that difficult and I know that, I just have such a hard time choosing. But, it just so happened that I printed out this side dish recipe in between one for pork and one for cupcakes. Since it’d be just weird to serve green beans with cupcakes, I decided it was a sign that I should serve it with the pork.

I had some leftover mushrooms in the fridge that were going to go bad soon, so I decided to toss those in as well. 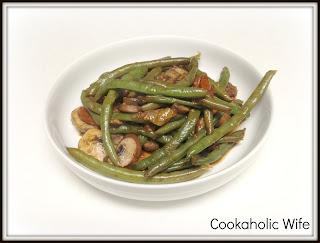 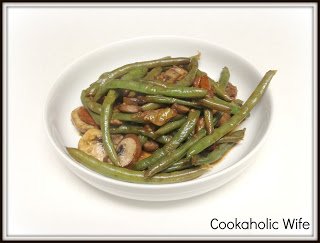 NicholeL
Sauteed Green Beans, Mushrooms and Cherry Tomatoes is an easy to make side dish that highlights the flavors of the vegetables and pairs greatly with a variety of proteins.
0 from 0 votes
Print Recipe Pin Recipe
Prep Time 5 mins
Cook Time 15 mins
Total Time 20 mins
Course Side Dish
Servings 4

I really enjoyed this side dish. Its something that comes together rather quickly and can be served throughout the year. It also paired really well with the spicy pork dish I made, which I’ll be sharing next week.