Slow Cooker Tacos al Pastor is a Mexican dish made with thinly shredded pork, that's marinated in a variety of seasonings and served, traditionally, on tortillas with pineapple, cilantro and onions.

There is a Mexican restaurant in my area, Taco Love Grill, that has the most incredible food. They have 12 different protein options just for their tacos, some of the most amazing appetizers and entrees and a handful of delicious desserts. When we go there, I always get tacos al pastor. But recently, I wanted to see if I could replicate the dish on my own.

What is tacos al pastor?

Tacos al Pastor is a Mexican dish, inspired by the lamb shawarma from the Lebanese. It's a pork shoulder, marinated in spices that is traditionally cooked on a spit (grill) and served on a flour tortilla with pineapple, onion and cilantro.

For this version, I cooked the pork shoulder in the slow cooker and included some pineapple as well, as that's how it comes from my favorite restaurant. Traditionally, corn tortillas are used, but I prefer flour tortillas and served these tacos on those.

If you love this recipe, you'll also love my Carne Asada Fries, also inspired by the same restaurant. 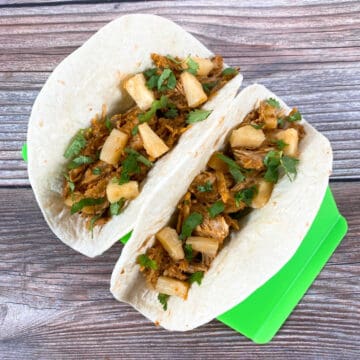 Substitutions: corn tortillas for flour ones. Replace Goya Sazon seasoning with achiote paste if you can find it. Add in some hot sauce to make these tacos spicy.