It's been a long time since I've tasked myself with the challenge of "go big or go home" for the Secret Recipe Club. My first ever post was probably one of my biggest challenges; I made a croquembouche!

This month I was assigned to Smells Like Brownies which is written by Melissa. She has a great collection of recipes, not just all baked goods either. I really debated on making something like crock pot dulce de leche, but figured it was too easy. (I will make it, just not for the SRC) Then I debated on coconut macaroons which ended up being a really strong contender until I found the macarons.

Macarons had been on my to-make list forever but always ended up getting bumped in favor of something else. Well, that was about to be no more, I was finally going to make them. I wasn't terribly intimidated to start out. I've been baking for a while now. I've made meringue and I've worked with almond meal so I felt like maybe I had a leg up in this challenge. 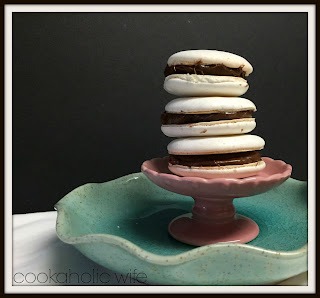 Directions:
1. Adjust an oven rack to be in the center of the oven. Preheat to 350 degrees.
2. Line two baking sheets with parchment paper. Draw 2-inch circles on the parchment, 1 ½-inch apart. Flip the parchment over.
3. In a large bowl, combine the almond meal and powdered sugar, whisking until no lumps remain. (If your almond meal is not very fine, run it through the food processor first. You do not want lumps.)
4. Make a well in the center of the almond meal and sugar mixture and add the 82 grams of egg whites. Stir together with a wooden spoon until you get a paste-like consistency.
5. Combine the water and sugar together in a medium saucepan. Attach a candy thermometer to the side. Heat over medium high heat, watching the thermometer. When the temperature gets to 200 degrees, combine the remaining egg whites with the pinch of sugar in the bowl of a stand mixer with the whisk attachment. Beat on medium high speed until soft peaks form.
6. Continue to carefully watch the saucepan. When the temperature reaches 248 degrees, immediately remove it from the heat. (If you get soft peaks before the temperature is reached, reduce your mixer speed to low/medium-low as to not overmix the egg whites)
7. Increase the speed of the mixture to medium-high. Drizzle a slow but steady stream of the sugar water mixture into the bowl of the stand mixer. Mix until the egg whites are glossy and stiff peaks have formed. (If you are adding food coloring, now is the time to do so.)
8. Gently fold ⅓ of the meringue batter into the almond meal batter. Continue to add and mix until all of the meringue is used or the batter runs off the back of a spoon in thick ribbons.
9. Transfer the batter to a large pastry bag fitted with a plain, round tip. Carefully pipe the circles, following the template on the parchment paper. Tap the baking sheet on the counter a few times to remove any air bubbles.
10. Bake for 9-12 minutes or until the cookies have grown "feet". Allow them to cool for 2-3 minutes on the parchment paper before transferring to a wire rack to continue cooling.
11. Once the cookies have cooled, match them up in evenly sized pairs. Spread ganache, buttercream or your filling of choice on the flat side of one cookie and press the flat side of an equally matched cookie to it. 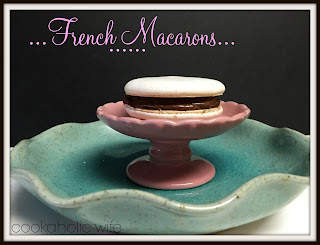 I debated not sharing this recipe with you and choosing another one, but food blogging has become so much about the perfect picture, the perfect recipe, that I feel like can sometimes make the typical home cook think their food is terrible because it's not as pretty. And that's not true! Sure, we all eat with our eyes first, but even if something isn't worthy of a front page of a magazine doesn't mean that it isn't delicious. 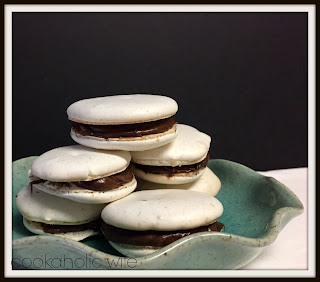 As you can see from my pictures, I didn't get very many cookies sandwiches that turned out perfectly, but I'm okay with that. My second batch didn't grow feet at all and they all ended up cracking. But macarons have not bested me yet. I plan on going over all the tips for how to get them to come out perfectly and trying again until I get the perfect batch.