One of my favorite things about summer is eating corn on the cob. I could easily eat it once or even twice a week from June to August, but apparently some people in the house would get bored of that. So I have to find ways to incorporate it into other side dishes. Apparently, corn on the cob = boring but corn on the cob mixed into other dishes = not boring. I don't get it either. 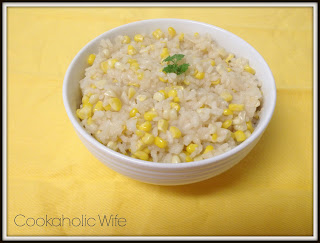 Sweet Corn Risotto
Source: A Cookaholic Wife Creation
Servings: 6
Printer Friendly
Ingredients:
Directions:
1. Slice the kernels off each cob of corn into a large bowl. Set aside.
2. Heat the chicken stock in a saucepan over low heat.
3. Add the olive oil to a large skillet and heat over medium. Add the onion and cook for 3 minutes or until slightly softened.
4. Stir in the arborio rice with a wooden spoon and cook until the rice becomes translucent.
5. Pour in the white wine, stirring frequently until absorbed.
6. Reduce the heat to medium-low. Add in 1 cup of chicken stock. Stir until the rice has fully absorbed the stock then repeat with another cup of stock.
7. Continue stirring and adding in the stock as necessary until the rice is soften. Stir in the corn kernels and butter until the butter has fully melted.
8. Serve, seasoning with salt and pepper to taste.
Yum! We haven't had risotto in a long time and this was a really nice way to lighten it up with the freshness and sweetness of the corn.