I've never been much of a pie person unless it was apple pie but even then, it needed to be made with fresh apples and not the canned apple pie filling which I found to be too sweet. When I came across this recipe I was intrigued. While I think of apples and pumpkin as staples of the fall season, I would never think it combine them together. 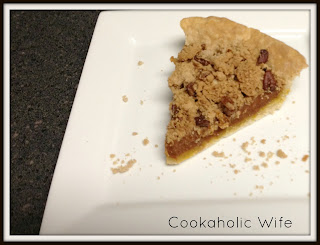 Since I recently just made apple butter I couldn't pass up using some of it in this recipe. 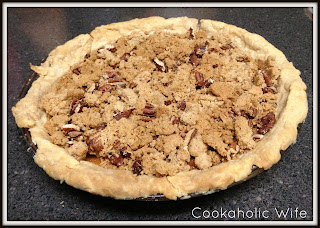 Apple Butter Pumpkin Pie
Source: Dixie Crystals
Servings: 8
Printer Friendly
Ingredients:
Crumble Topping:
Directions:
1. Preheat the oven to 400. Place pie crust into a 9" round pie plate.
2. In a large bowl whisk eggs until smooth. Add remaining ingredients, except for half-and-half. Stir until well combined.
3. Whisk in half-and-half. Pour into prepared pie crust.
4. Bake for 10 minutes then reduce the oven temperature to 350.
5. Continue baking for 35-40 minutes or until the pie has set.
6. Meanwhile, combine flour, brown sugar, cinnamon and salt together in a bowl. Cut in butter until the mixture resembles coarse crumbles. Stir in pecans.
7. Spread crumble mixture on a parchment lined baking sheet. When the pie has 15 minutes left, place the baking sheet in the oven.
8. Remove pie and crumble from the oven. Once crumble is cool enough to handle, sprinkle generously over the pie. 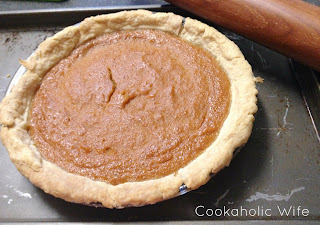