Baked Pumpkin Donut Bites are coated in cinnamon sugar and the perfect breakfast or snack for fall.

Disclaimer: I received product in exchange for participating in the #FallFlavors event. All opinions are my own.

Last year I participated in a local arts festival where I sold a bunch of baked goods. My initial plan was muffins, cookies and mini loaves of bread. At the last minute I decided to add in some donut bites and it turned out they were my best seller. Of course, I didn't make that many of them and I had some sad customers when they found out they were all gone.

The festival didn't happen this year, but if it's held next year I am absolutely increasing my baking of donut holes in a variety of flavors. Maybe it's a bit early to be testing recipes, but I wanted to make sure that Pumpkin Donut Bites tasted just as good as I imagined they would in my head.

What is a pumpkin donut bite?

A super easy snack or breakfast. These donut bites are made using canned pumpkin and basic baking ingredients like flour, sugar, eggs, milk and vanilla. They're baked in a mini muffin pan and then coated in cinnamon sugar to become extra delicious!

How to make donut bites

Substitutions for this recipe 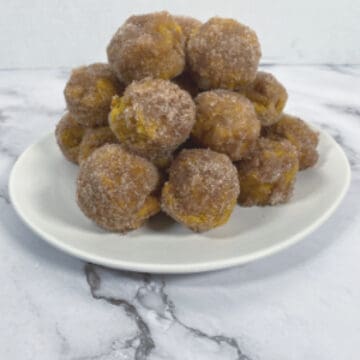 for the donut bites

For the donut bites

Thank you #FallFlavors Week Sponsors: Melissa’s Produce, Dixie Crystals, Torani, Republic of Tea, Taylor & Colledge, and Nairn’s  for providing the prizes free of charge. These companies also provided the bloggers with samples and product to use for #FallFlavors Week recipes. All opinions are my own.

The #FallFlavors Week giveaway is open to residents of the United States who are 18 years of age or older.   All entries for the winner will be checked and verified. By entering you give the right to use your name and likeness. The number of entries received determines the odds of winning. Six (6)  winners will be selected. The prize packages will be sent directly from the giveaway sponsors. The #FallFlavors Week Bloggers are not responsible for the fulfillment or delivery of the prize packages. Bloggers hosting this giveaway and their immediate family members in their household cannot enter or win the giveaway. No purchase necessary. Void where prohibited by law.