Chicken Cordon Bleu Mac and Cheese is the ultimate comfort food - chicken and ham are mixed into a swiss and gruyere based macaroni and cheese.

Chicken Cordon Bleu Mac and Cheese is definitely the best of both worlds when it comes to comfort food. You have the standard ingredients of chicken cordon bleu - chicken, ham, swiss and dijon mixed into a cheesy and gooey macaroni and cheese.

I used to make macaroni and cheese all of the time. If there was a recipe out there, I needed to try it. Which is how this recipe initially came about. That and because chicken cordon bleu is Tom's favorite dish ever.

We are not a house that eats leftovers and I cannot even keep this in the fridge overnight. It's gone immediately! I'm going to have to start making it in double batches! Scroll down or view the notes of the recipe card for make-ahead and freezing info.

What is chicken cordon bleu mac and cheese?

Let's start with the chicken cordon bleu part - it literally translates to Blue Ribbon Chicken, which is a term applied to food prepared to a very high standard by outstanding cooks. It is a Swiss dish, where chicken breasts are stuffed with sliced ham and Swiss cheese, then breaded and pan fried.

For the macaroni and cheese version, shredded chicken and ham are mixed into a Swiss and Gruyere mac and cheese and then the whole dish is topped with toasted breadcrumbs and baked to gooey perfection.

How to make this casserole

Substitutions and make ahead options

what to serve with this dish

It's a pretty filling meal on it's own, but some green veggies definitely wouldn't hurt! 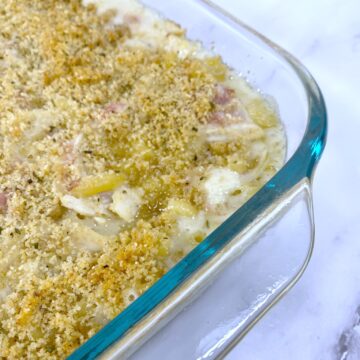 Keyword chicken cordon bleu pasta, chicken macaroni and cheese
Did you make this? I want to see, soMention @CookaholicWife or tag #cookaholicwife! 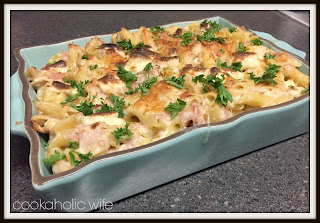