It was a really ugly rainy day on Sunday and I didn't make it to the grocery store until close to 4 PM. I gave up on making the pierogi that night and figured I would do it on Monday. Well, it turned out to be quite the disaster. I'm not sure if I didn't have the dough thick enough or if I'm just so used to frozen pierogi that I didn't think it was very good. The dough was still kind of chewy even though I followed the recipe exactly. So, next time I think I'll use wonton wrappers and see what happens. Maybe baking them first would be a good idea too. We'll see.

Last night I had planned on making chicken cordon bleu but forgot to pull out the chicken. When I called Tom to have him do it, I found out that we were out of chicken breasts and only had chicken tenders. So I decided to improvise and this is what I came up with. 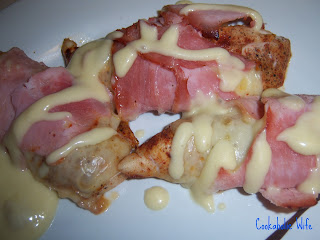 I think for improvising last minute this turned out pretty well. Next time I might brown the chicken in a pan first just so it has more color since it kind of blends in with the Swiss cheese while its baking.