I had always heard that souffles were very difficult to make because if you didn't do it perfectly, they would collapse the second you took them out of the oven. Sure, they'd still be edible, but they wouldn't be pretty or the way they were supposed to be served.
The first time I had souffle was when Tom and I went to Celebrity Kitchens. One of the courses included a bleu cheese souffle, which I was hesitant to eat as I wasn't a fan of bleu cheese at the time. Luckily I tried it, because it was incredible and I also found that I actually like bleu cheese.
Making a souffle has been on my 28 Before 28 list for quite some time now and I kept putting it off, thinking it was going to take forever to make and be really difficult. But, as the days until my 28th birthday quickly approach, I decided I needed to get over my souffle fear and make them.
Recently I purchased a new cookbook series called Eat What You Love and Eat More of What You Love after looking through them while visiting the in-laws. Eat More had a recipe for souffle that only called for 5 ingredients. How hard could something possibly be if it only involves 5 ingredients!? 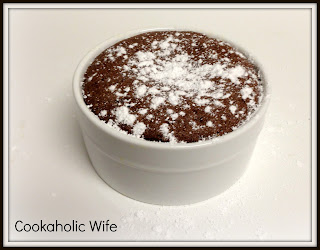 Chocolate Souffles
Source: Eat More of What You Love
Servings: 5
Printer Friendly
Ingredients:
Directions:
1. Preheat the oven to 400 degrees. Spray 5 six-ounce ramekins with non-stick cooking spray and place them on a sheet pan.
2. Separate the eggs, placing the whites in the bowl of your stand mixer. Place two of the yolks in a separate bowl. Discard or save remaining yolks for another use.
3. Attach the whisk attachment to your stand mixer and beat the egg whites on medium-high speed until foamy. Slowly add in the sugar, a little bit at a time and continue to beat until stiff peaks form.
4. Meanwhile, dissolve the instant coffee in 3 tbsp. water. Then whisk in the cocoa powder and mix it all into the egg yolks.
5. Place the chocolate chips in a microwave safe bowl, and microwave at 30 second intervals, stirring each time until smooth. Then stir the melted chocolate into the egg yolk mixture.
6. Gently fold half of the chocolate mixture into the egg whites, being careful not to deflate the egg whites. Once combined, add in the remaining chocolate mixture and fold until it is all combined.
7. Spoon the mixture into the prepared ramekins and bake for 11 minutes or until just firm to the touch. Sprinkle lightly with powdered sugar and serve immediately.

Umm, somebody lied. This was by far one of the easier things I've ever made. Sure, I used the stand mixer to do the majority of the work for me, but even so, this was not difficult at all. If I had any idea how easy it was to make something that looks so difficult, I'd have made these already! 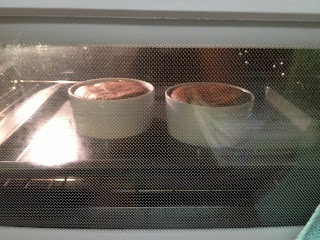 Obviously, the only thing you don't want to do is open the oven while they are cooking. So, if you're impatient like me, just turn on your oven light, and take a seat on the floor to watch them cook up. Then, after a minute or two, when you realize nothing amazing is going to happen, go back to cleaning up the kitchen and just let the souffles cook.