Easy Homemade Apple Pie is the classic American dessert. Sweet and tart apples are sliced up and baked into a flaky pie crust for the perfect slice of deliciousness!

Ten years ago today, I shared my first recipe with you, an apple pie. I've probably made at least 30 apple pies since then, each a little bit different than the last one. Seeing as it has been 10 years since I started Cookaholic Wife, it only seemed fitting to mark the occasion with how it started. Apple pie is the second dessert I learned how to make from scratch. The first was black bottom cupcakes. Some apple pies that I've made have included making the crust from scratch, others haven't. Some have had lattice tops and others have had a full pie crust top. Today I wanted to share an easy go-to version that I've made a bunch of times. But before we get to the pie, let's talk about the blog for a minute, shall we? Back in 2009, it felt like everyone had started blogging, especially food blogging. I had started cooking and baking a lot more then, as Tom and I had recently moved in with each other. Combining that with my love of writing (and talking), it only seemed fitting to start my own food blog.

I've learned a ton along the way and blogging has changed pretty significantly. Back then, you (mostly) blogged food because you liked doing it. Now, it's much more than that. There's a technical side that I admit to barely understanding and just barely keeping up with. SEO, readability, ads, hero shots, call to action...none of this was really even a thing yet. Hell, Pinterest and Instagram weren't EVEN A THING when I started blogging.

It's nothing fancy, to be honest. It'd be cool if I could give you a mixer, or an Instant Pot, or an air fryer, but that's not gonna happen. Instead, I'd like to give you products that I love and that are from my home state of Maryland. But before I share what I'm giving you let's talk about this apple pie to make my "readability" happy. 😜

WHERE DID APPLE PIE ORIGINATE?

Even though Apple Pie is known as the classic American dessert, apple pie actually originated in England way back in the 1300's. The pie became popular in America during the Civil War when soldiers from both sides scavenged for the ingredients and made pie. The recipe gained in popularity and by World War II, there was even a saying that the soldiers were "fighting for mom and apple pie". Pretty cool huh? WHAT ARE THE BEST APPLES TO USE IN AN APPLE PIE?

The answer to this varies by baker, but nearly everyone agrees that a combination of sweet and tart apples make for the best apple pie. Granny Smith apples, the sour green ones, are most commonly used in apple pie. But other varieties like Golden Delicious, Pink Lady, Braeburn, Jazz and Honeycrisp are also popular. My personal favorite is the Honeycrisp. A honeycrisp apple is the perfect balance of sweet and tart, meaning you can cut back a little on the amount of sugar you add to the pie.

DOES APPLE PIE NEED TO BE REFRIGERATED?

Not immediately, but yes. After your pie has been cooked and cool completely, you can the leftovers in the refrigerator for a few days. HOW TO MAKE AN APPLE PIE SO ABOUT THAT GIVEAWAY..

Finally, right? So like I said above, the giveaway includes a bunch of items that I use regularly and some cool stuff that's local to Maryland. HOW TO ENTER THE GIVEAWAY:

All you need to do is leave a comment on what your favorite pie recipe is. Make sure to click "I commented" on the Rafflecopter so you can be entered to win.

Disclaimer: The rafflecopter is open from Monday November 25th through Sunday, December 1, 2019. A winner will be chosen no later than Tuesday, December 3 2019. You must live in the United States to win. Should the winner not respond within 3 business days, a second winner will be drawn. Giveaway items were chosen by Cookaholic Wife, by personal preference. The companies who produce the products chosen are not included, or aware, of the giveaway.

WANT TO TRY THIS RECIPE? SAVE IT TO YOUR FAVORITE PINTEREST BOARD. 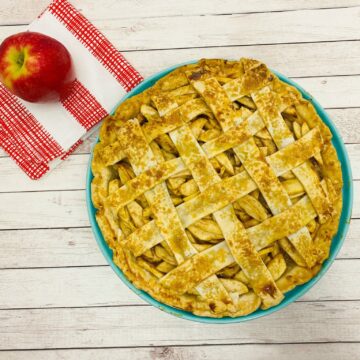 Apples Egg Wash Turbinado Sugar Nutritional Data may vary depending on type of pie dough and amount of apples used.