Last month I decided to join a new blogging event called the Fantastical Food Fight. It's hosted by Sarah of Fantastical Sharing of Recipes . Each month there is an ingredient or theme and bloggers can make any recipe that fits under those guidelines.

I made an ice cream base last month using almond milk and unfortunately when it came time to put it in the ice cream attachment of my Kitchenaid, I realized it had curdled. There wasn't enough time to make a new base so I begrudgingly had sat out and vowed to make a recipe far enough in advance this month to actually be able to share with everyone. 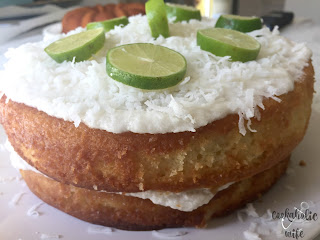 The theme for this month is rum and my first thought was "Hey! Right up my alley!" I searched through a ton of different recipes trying to figure out which to make for this and eventually ended up settling on a cake recipe that I found on Inside BruCrew Life.

I've had some serious cake making fails recently (more about that tomorrow) so I decided to follow the recipe nearly exactly (replacing unsweetened applesauce for oil and coconut flavored rum for light rum or rum extract) to reduce my chances in cake failure and not being able to participate. 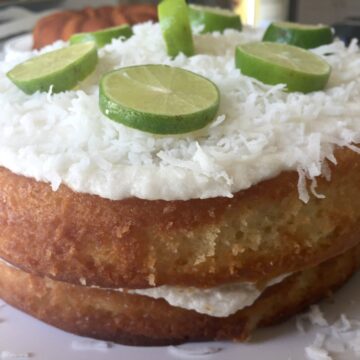 * Cream of coconut is referred to as the solid portion when you buy a can of coconut milk from the international aisle. You can also find cream of coconut in the drink mix section but it is thinner and you'll probably need to use less. If using the canned version, make sure to only scoop out the solids otherwise your frosting will separate. Source: Inside BruCrew Life 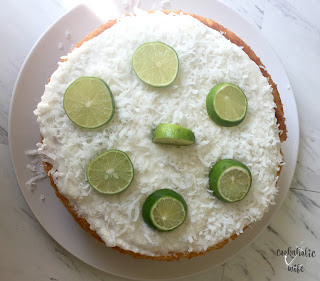 Isn't this cake adorable? It came together so easily! There is a mild lime flavor throughout the cake and then this sweet hint of coconut.