Happy first day of March! I cannot believe we are already three months in 2017! Time sure is flying by, especially with how crazy busy I've been lately.

It's time for me to participate in #FoodieExtravaganza again, a monthly blogging event where each theme comes from a National Food Holiday. In celebration of Spanish paella day, the theme for this month is paella. Our host is Sue of Palatable Pastimes.

I first learned about paella in seventh or eighth grade during Spanish class when we began discussing foods. At the time, I had a very picky palette and I had no idea if I was going to like a dish that combined proteins together along with rice and vegetables. A few months later my family was visiting my aunt and uncle at their house at the beach and my uncle announced that we were having paella for dinner. I was super excited to try it since I knew what it was! 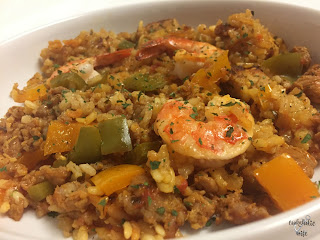 Does it ruin the story if I tell you I can't remember if I liked it or not? Sorry, but that's the truth. I'm fairly certain I did, but the memory I have is more about recognizing the dish and talking to my uncle about the ingredients included in it.

Now that I'm much less picky, I know that I'm going to the dish and was thrilled to be able to make it again for this event. Paella comes in different versions; vegetarian, seafood, Valencia and mixed, which means a combination of sea and land proteins. I decided to do a mixed paella simply because I had all three proteins in the freezer. 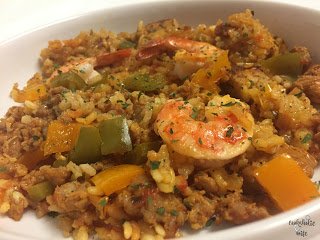 To make this a weeknight recipe: prepare the sofrito, cook the sausage and marinate the chicken one day in advance. 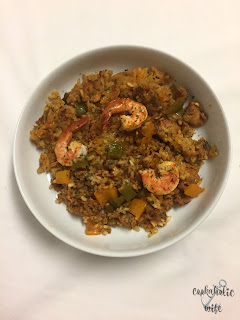 I know that looks like an insane amount of ingredients, but paella has a ton of flavor and that flavor needs to be developed over time. 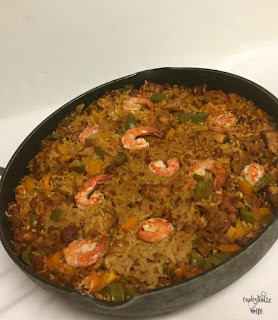 Paella is traditionally served in the pan it is cooked in so you can bring it right to your table as is, or your can divide out portions onto plates.