If you're looking for easy comfort food, this ham and potato soup is sure to please. Made with a ham steak, potatoes and veggies in a milk based broth, you'll warm right up with a bowl of this soup.

Update: This recipe was originally posted in January 2013. It has been revised and photos have been updated for reader enhancement and republished in February 2021.

Have I mentioned 1,000 times yet that I am not a fan of winter? I'm definitely not and what makes it worse is that my house is very overdue for some updated insulation, making it cold ALL of the time. A fleece blanket, a portable space heater and a hearty bowl of this soup is a great way to warm up on those cold winter days.

what is creamy ham and potato soup?

This soup is made with ham steak, but can also be made with any leftover ham you may have. Potatoes, carrots, celery, onion and corn round out the vegetables in the soup and the creamy, white broth comes from an easy roux made with butter, flour, milk and cheese. Garlic, rosemary, thyme, salt and pepper add the flavor to this delicious bowl of comfort food.

FAQ's for this soup 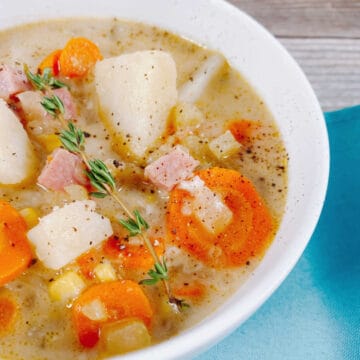 If you need to substitute cornstarch for the flour, you'll need 1 ½ tablespoons. Mix the cornstarch with 2 tablespoons of the milk. Melt the butter, slowly pour in the milk and bring it to a simmer. Once simmering, add in the cornstarch mixture and stir until thickened. Then follow recipe as stated above for adding in cheese and the remaining steps.  Ham and Potato Soup should not be frozen as the potatoes take on a mealy texture. Soup will keep in the refrigerator for -3-5 days. 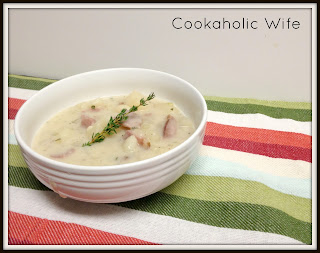