Well, it has arrived. My 28th birthday is here. At 1:04 this afternoon, I will officially be 28 years old. I feel like this should mean something, or have some significance, but it really doesn't.

I've spent too much time recently rushing to get through by 28 Before 28 List (which will have a recap tomorrow) and being excited to go to Florida, that I haven't really put any thought into my birthday and getting older. Oh well, maybe I'll have time to worry about getting older next year.

After making the creme brulee yesterday, I had quite a bit of leftover egg whites and nothing to do with them. So I headed off to Google and searched for "recipes to use up  leftover egg whites". David Lebovitz had just that information for me. I debated for all of half a second on making macaroons, which was his first suggestion but immediately shoved that behind me. It was already late in the afternoon and the last thing I felt like doing was spending time doing anything else tedious.

Angel Food Cake was the next thing on the list and ironically, something that I cut from my initial 30 Before 30 List. I found it only fitting to make the cake, not only for originally cutting it, but because birthdays = cake. With a decent amount of heavy cream left over, I decided whipping up some fresh whipped cream and serving the cake along with some fruit would be the perfect compliment to my birthday. 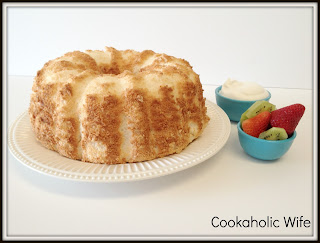 Directions:
1. Preheat the oven to 350. Spray a tube or Bundt pan with non-stick cooking spray.
2. Combine the cake flour, ½ cup sugar and salt together in a small bowl.
3. In the bowl of your stand mixer with the whisk attachment, beat the egg whites on medium speed until foamy, then add in the cream of tartar and the lemon juice.
4. Increase the speed to high and continue to beat until the mixture thickens. Slowly pour in the remaining 1 cup of sugar, ¼ cup at a time. Do not left the egg whites get stiff, they should remain cloud-like.
5. Add in the vanilla and then turn off the mixer once combined.
6. Use a rubber spatula to fold in the flour mixture in small amounts.
7. Pour the mixture into a tube pan or Bundt pan and bake for 45 minutes.
8. Invert the pan over a wire rack until cooled. Gently remove the cake and serve with fruit, whipped cream or your desired toppings. 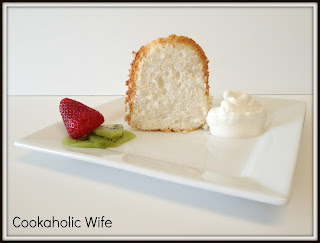 This tastes just like the angel food cake I've bought from the store! I'm just sad that I didn't spray the pan before adding the batter. The recipe says not to use a non-stick pan and doesn't say anything about preparing it, so I figured it would be okay. So while the outside of the cake may not be smooth and pretty, it is quite delicious!