I have a bit of an obsession with my Bundt pan. As I've mentioned before I wanted one for a long time and then once I got one I kind of stopped making cakes. Now that I've reorganized my kitchen cabinets (for 9,543,786,128th time) I've made it much easier to access the pan and I keep finding more recipes.

Citrus = spring to me and since the weather can't seem to decide if it wants to be warm and sunny in the 70's or cool and cloudy in the 60's, this bright and flavorful cake does a great job of making it feel like its a nice spring day when you might not actually be having one. 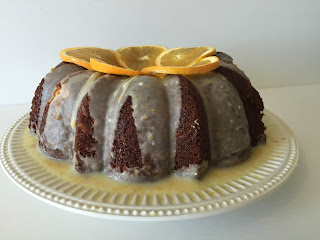 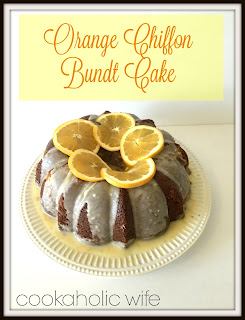 Directions:
1. Spray the Bundt pan with non-sticking cooking spray. Preheat the oven to 350 degrees.
2. In a large bowl, combine the flour, sugar, salt and baking powder. Separate the egg yolks from the egg whites.
3. In another bowl, combine the egg yolks, orange juice, oil and zest. Whisk until combined. In the bowl of a stand mixer, combine the egg whites with the cream of tartar and mix on high speed until stiff peaks form. (The whites will be slightly glossy and when you stop the mixer the peak on the beater will not fall)
4 Meanwhile, combine the flour with the yolk-orange mixture until no lumps of flour remain. When the egg whites are stiff, gently fold them into the rest of the batter.
5.Pour the batter into the prepared Bundt pan and swirl a knife through the batter to remove any air bubbles. Bake on the lowest oven rack for 45-50 minutes.
6. Remove from the oven and immediately invert the pan over a plate. Allow to cool completely, then flip the pan back over and run a knife around the edges to loosen the cake. Flip the pan back over on a serving platter to release the cake.
7. Prepare the glaze by melting the butter then whisking in the remaining ingredients until it is thick enough to pour over the cake. Drizzle the glaze over the cake and serve. 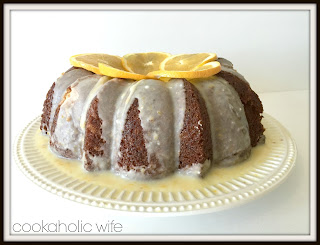 As you can see from the picture, I still haven't mastered the art of making a glaze thick enough to not run all over the plate after it goes down the sides of the cake. I had a slight mishap with the center of the cake sticking to the pan, which is why I chose to cover it with the orange slices. No one had any idea and thought it was just an additional pretty decoration.

Using the fresh orange juice in this cake makes it incredibly moist and the zest really made the orange flavor known.