This is one of those perfect summer recipes that I could eat over and over again. Unfortunately, I appear to be the only one to think so since Tom wasn't a fan of the corn hash. I don't get it. He likes corn, he likes red pepper, he likes bacon. Combine the three ingredients and he's not a fan? Does.not.compute.

More for me though. So it worked out. This does take a bit of time to prepare (close to an hour) so it might be a dish you'd like to have on a Sunday or just an evening where you don't have a lot of plans. 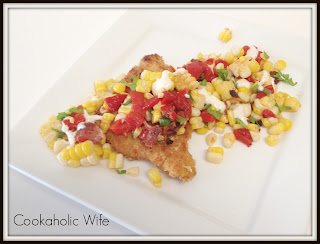 Directions:
1. Place buttermilk, paprika, crushed red pepper flakes and chicken in a zip top bag. Marinate for at least 30 minutes in the refrigerator, turning once.
2. Preheat the oven to 400. Place a large baking sheet on the second rack. Place the ears of corn, still wrapped in their husks, directly onto to the top rack. Bake for 30 minutes.
3. Let the corn cool slightly, then remove the husks and silk. Slice the corn kernels from the cob into a large bowl.
4. In a shallow dish, add the Panko and kosher salt. Dip the chicken into the Panko mixture until fully coated on both sides. Set on a plate.
5. Heat a large skillet over medium heat. Add the bacon to the skillet and cook until done. Remove from the skillet with a slotted spoon and place on a paper towel to drain.
6. Add the oil and the chicken cutlets to the skillet and cook for 4-5 minutes on each side, or until cooked through.
7. Meanwhile, add the bacon pieces, roasted red pepper, green onions, and parsley to the bowl with the corn. Toss to combine.
8. Plate the chicken and serve with the corn hash.

I opted to not to include the buttermilk dressing that goes with this recipe because I knew Tom wouldn't enjoy it, but also because I don't purchase actual buttermilk for recipes. I use a substitute of milk with vinegar, which works for baking and marinades, but I don't think it would be all that appealing as a dressing.