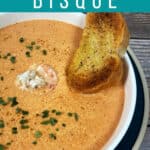 Easy Crab and Shrimp Bisque is a creamy soup made with crab meat, shrimp, half-and-half, veggies and seasonings.

When I first made this recipe, I only used shrimp and felt as though it was missing something. Being from Maryland, it's only natural to add crab and Old Bay to seafood recipes and that was exactly what this creamy soup recipe needed!

What is easy crab and shrimp bisque?

A bisque is a creamy soup that has been pureed. Commonly, bisque is made with lobster, shrimp or crab. My version of this recipe includes both crab and shrimp. And instead of using cream, I chose the lighter option of using half-and-half. The bisque is still creamy and delicious, but you save a few calories.

First, prepare your crab and shrimp. Gently pick through the crab meat to remove any shells. Remove the tails and legs from the shrimp and devein them.

Then, cook your vegetables. Heat olive oil in a large saucepan over medium high heat. Add the onion and red pepper and cook for 5-7 minutes, until softened. Then add in the garlic and cook for another minute.

Next, stir in the tomato sauce, hot sauce, Old Bay, half-and-half and salt and pepper. Stir until combined, then add in the crab and shrimp. Bring to a boil, then reduce to a simmer.

Then, transfer the mixture to a blender or food processor. (Optionally, remove some shrimp and crab to garnish the bowl with). Puree until smooth.

Finally, plate and garnish the soup. Pour soup into bowls and sprinkle Parmesan cheese and chives or parsley on top. If you reserved shrimp and crab, place them in the center of the bowl. You can also drizzle the soup with more half-and-half, if desired.

What is the difference between cream of crab and a bisque?

Cream of crab soup features more veggies and sherry added into the soup. It is not blended. A bisque is blended, or pureed, before serving.

What is the difference between a bisque and a chowder?

A chowder is more like a stew with hearty pieces of vegetables, while a bisque is a pureed soup.

What is the best crab meat to use in a bisque?

It depends on how fancy you want to be. Backfin is the crab meat I used in this soup. Lump crab meat would be more impressive as a topping on the soup, but the lumps would be wasted going through the blender. Claw meat would be the most affordable option, providing large pieces at the cheapest price.

How do you serve crab and shrimp bisque?

I prefer to serve the soup in a shallow bowl, like a pasta bowl, but it would also be delicious served in a bread bowl.

Crab and Shrimp Bisque is delicious when served with toasted crusty bread! But, you could also serve it as an appetizer, maybe in some fancy shooter glasses, and round out the meal with another seafood entrée like my Maryland Crab Cakes or Shrimp Scampi and a green salad.

If you love crab, shrimp and Old Bay, you'll love my other Maryland recipes.

Optional: once soup has boiled, remove 4 shrimp before blending. Place shrimp on top of plated soup and garnish as desired.