Spiced Apple Cranberry Sauce is the best homemade cranberry sauce you'll ever have! Made with fresh cranberries, apples and spices for the perfect blend of sweet and tart!

The consistency of canned cranberry sauce kinda creeps me out. Not to the point where I won't eat it, but I just prefer to make homemade cranberry sauce. For years, I would make Pear Honey Cranberry Sauce, but I decided to try something different and ended up with this recipe, my new favorite.

What is spiced apple cranberry sauce?

According to my cousin, it "tastes like the holidays in my mouth". Which I take to be high praise. Cranberries, apples, brown sugar, apple cider and spices such as cinnamon, cardamom, ginger and nutmeg combine in this extra delicious cranberry sauce. Oh, and there's bourbon, because I love bourbon.

Fall spices like cinnamon, ground ginger, nutmeg, allspice and cardamom are all strong flavors. They can easily overpower a dish but when you get the right combination, it can really make a dish sing. Most people, reasonable people, would have chosen one or two of those spices and added them to cranberry sauce.

But then there is me. Who decided to add a bunch of them. I love bold flavored food, so why not?

How to make cranberry sauce

Do I have to add bourbon to my cranberry sauce?

Absolutely not. I just really love bourbon. So much so that I also have a Bourbon Cranberry Sauce. Most, but not all, of the alcohol will cook off but keep that in mind if serving children or those who don't drink.

When stored in an air-tight container, cranberry sauce will last for about 10 days in the fridge. Or you can freeze it for a few months. I always make my cranberry sauce 2 weeks before Thanksgiving and freeze it.

How do I make cranberry sauce less tart?

Don't worry! Once the cranberry sauce is removed from the heat, the sauce will thicken up as it cools. If it still isn't thick enough for you, place the sauce back over low heat for another 10-15 minutes, stirring frequently.

Like I said, the spices I used in this recipe are bold. If you aren't a fan of nutmeg or cardamom, feel free to leave them out. Allspice and ground cloves would also make a great addition to this cranberry sauce. 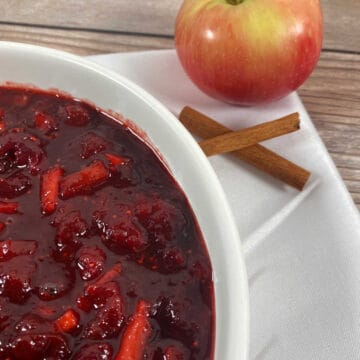