Sticky toffee pudding first appeared in England in the 1970's. It's a moist sponge cake make with rehydrated dates and covered in a rich toffee sauce. It's commonly served with vanilla custard or ice cream.

For years I watched Gordon Ramsey yell at chefs for those recipes. That meant I needed to try them, right? In Vegas, Gordon's version has a salted caramel and Speculoos ice cream. Two of my favorite things!

February's theme for Baking Bloggers is British food. At first, I had no idea what to make. Vaguely I remembered trying British food and not really caring for it.

I have no idea where that came from. When I started to search British foods, I found tons and tons that I wanted to make. But, it didn't take long to settle on a sticky toffee pudding recipe.

The varieties looked delicious, but I wanted to stick with the classic version for this blogging event. Sticky toffee pudding can be served individually in ramekins or in a larger baking dish. It's your choice. 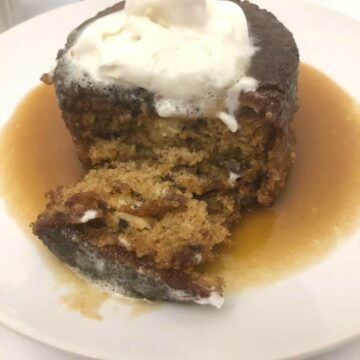 Cake can be served hot or at room temperature, but sauce should always be served warm.

Knowing I wanted to take this to work, I made 3 servings in ramekins for us to enjoy at home and the rest was poured into a baking dish to take to work.

If you have a sweet tooth, you're going to love this cake! It's light and airy light a sponge cake should be. And that sauce? Yeah I wouldn't blame you if you made extra, poured some in your coffee, over your pancakes...just about anywhere!