That is an absolute mouthful of a recipe name, but I felt it was necessary for you to really know what you were getting into here.

It really is true that bacon makes everything taste better. I have never been a fan of meatloaf. I never saw the point in adding an egg, bread and some seasoning to a pile of ground beef, forming it into the shape of bread and then baking it. It’s meat. Not bread. Why the loaf? I don’t get it.

I still don’t get it. After a few failed attempts at making meatloaf previously I had pretty much given up hope that any meat with loaf following it was just not going to grace our presence and show up on the table. (The singer included.)

Then last week happened. I am trying to use up what we have in the freezer so I can keep it moderately empty to hold Thanksgiving and Christmas foods and then I plan fill it all over again with freezer meals. I had a pound of ground turkey to use. I’m burgered-out. We just had pot pie so I wasn’t feeling a turkey shepherd’s pie. So I headed over to Pinterest to see what was lurking out there. The answer was nothing appealing. Allrecipes.com was my next step, because if you can think of it, they most likely have a recipe for it. And that is where I found a recipe for a turkey bacon cheeseburger meatloaf.

The cup part of it was my idea. I was concerned that if I actually went with the loaf shape, it would dry out too quickly. And there you have it, dinner on a Monday night. 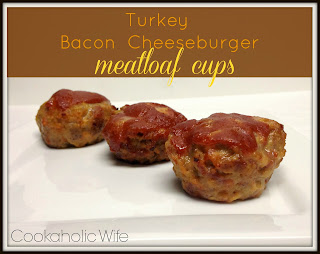 Directions:
1. Preheat the oven to 350 degrees. Spray a cupcake or muffin pan with non-stick cooking spray.
2. Combine all of the ingredients for the meatloaf together in a large bowl. In a separate bowl, combine the ingredients for the sauce and set aside.
3. Fill each muffin/cupcake section of with the meatloaf mixture and top with a dollop of the sauce, about the size of the tablespoon.
4. Bake for 20-25 minutes or until cooked through. 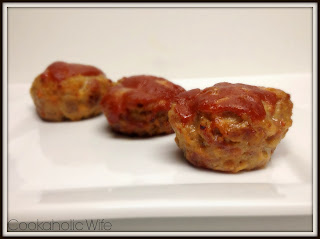 When I checked these at 15 minutes I knew I didn’t want to allow them to keep cooking in the muffin pan. Even with lean ground beef, the grease was pooling at the bottom and nobody wants a greasy meatloaf cupcake. I transferred these to a wire rack spray with non-stick on top of a larger baking sheet. They held their shape and it allowed for them not to cook in their own fat.

I honestly wasn’t expecting much from these at all, but they were really, really good. Maybe it was just the bacon or maybe because I made them in bite-sized servings, but neither Tom nor I could get over just how tasty these were. I definitely plan on making them again!