Last Friday Tom and I got on a plane to go to Michigan for his friend Andrew's wedding. Seeing as he flew out to Maryland for our wedding four years ago, it was only fitting we returned the favor.

I've never been to Michigan before and aside from knowing it would be colder and there would be lakes, I really had no idea what to expect. We landed in Grand Rapids, late, a little after 1 PM and Tom declared that bumpy flights follow me around. (This is quite possible) After standing in line for the rental car, we headed out to meet Calvin and go to a place that Tom picked out called Yesterdog.

They're known for their hot dogs and some famous people, like the president, have ate there. As someone who is not a huge hot dog fan, I didn't get the hype, but whatever the food was good. Grand Rapids is apparently not an ATT friendly city and I couldn't even get my phone to take pictures of the food. Sorry, you're going to have to do without pics of a hot dog.

We wandered around the few blocks with shops for a little bit, stopping in a coffee house and trying their caramel apple cider and a chocolate caramel oatmeal brownie cake thing. It was massive, sweet and delicious, but I was more impressed by the cider, which unfortunately did not photograph well. Two old bookstores (and a trip down memory lane for me) later we decided to head north (?) to Traverse City since it was closer to our final destination and where Calvin was meeting his family. 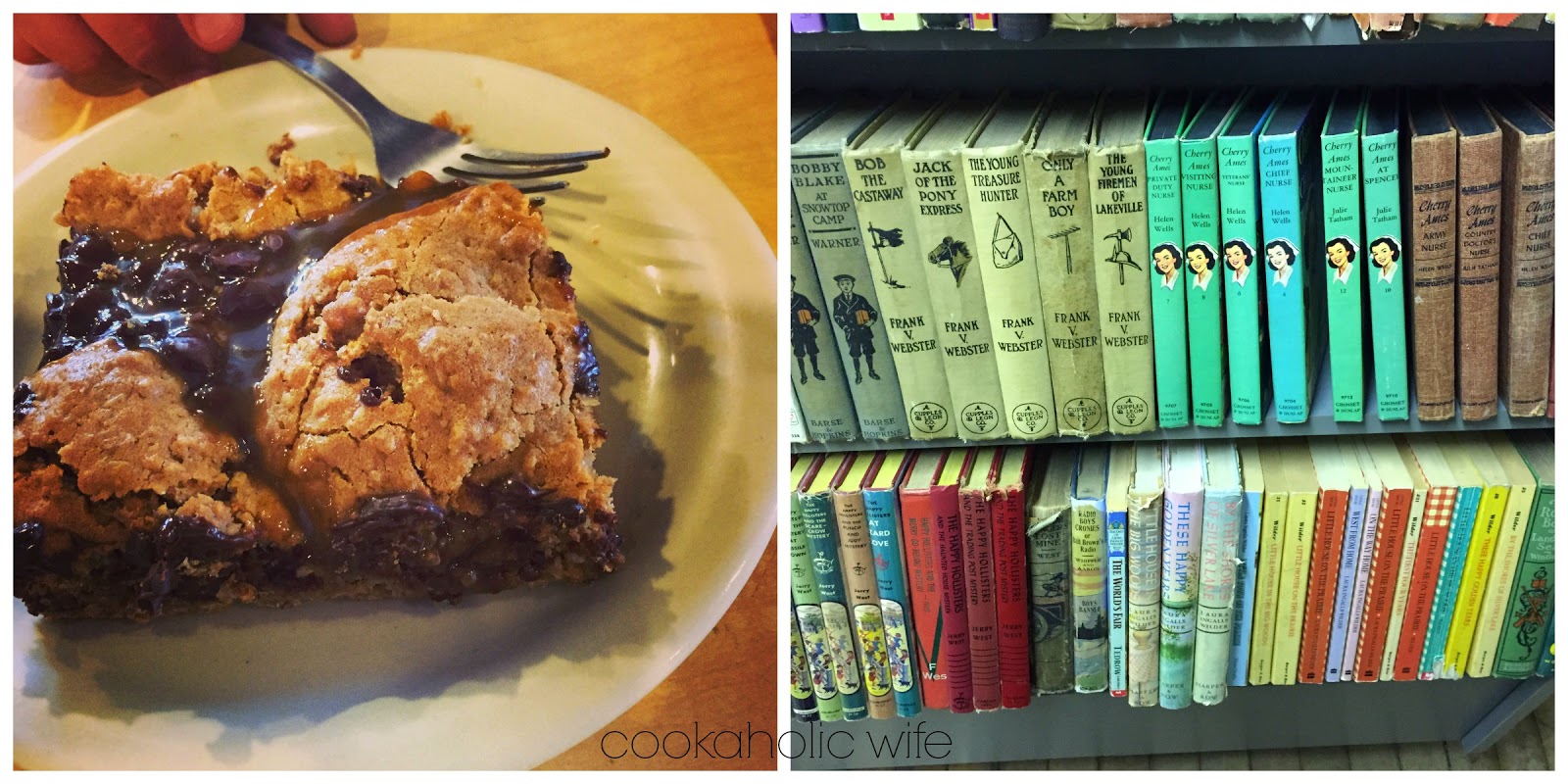 If you haven't been to Michigan, let me just tell you that it is rural. I grew up in the suburbs. Street signs, sidewalks, everything you could really need within 30 minutes of where ever you were. Here, we sometimes spent more than 30 minutes on the interstate between towns. There's nothing but trees. Pretty trees since they were changing colors, but still, nothing to look at but trees. 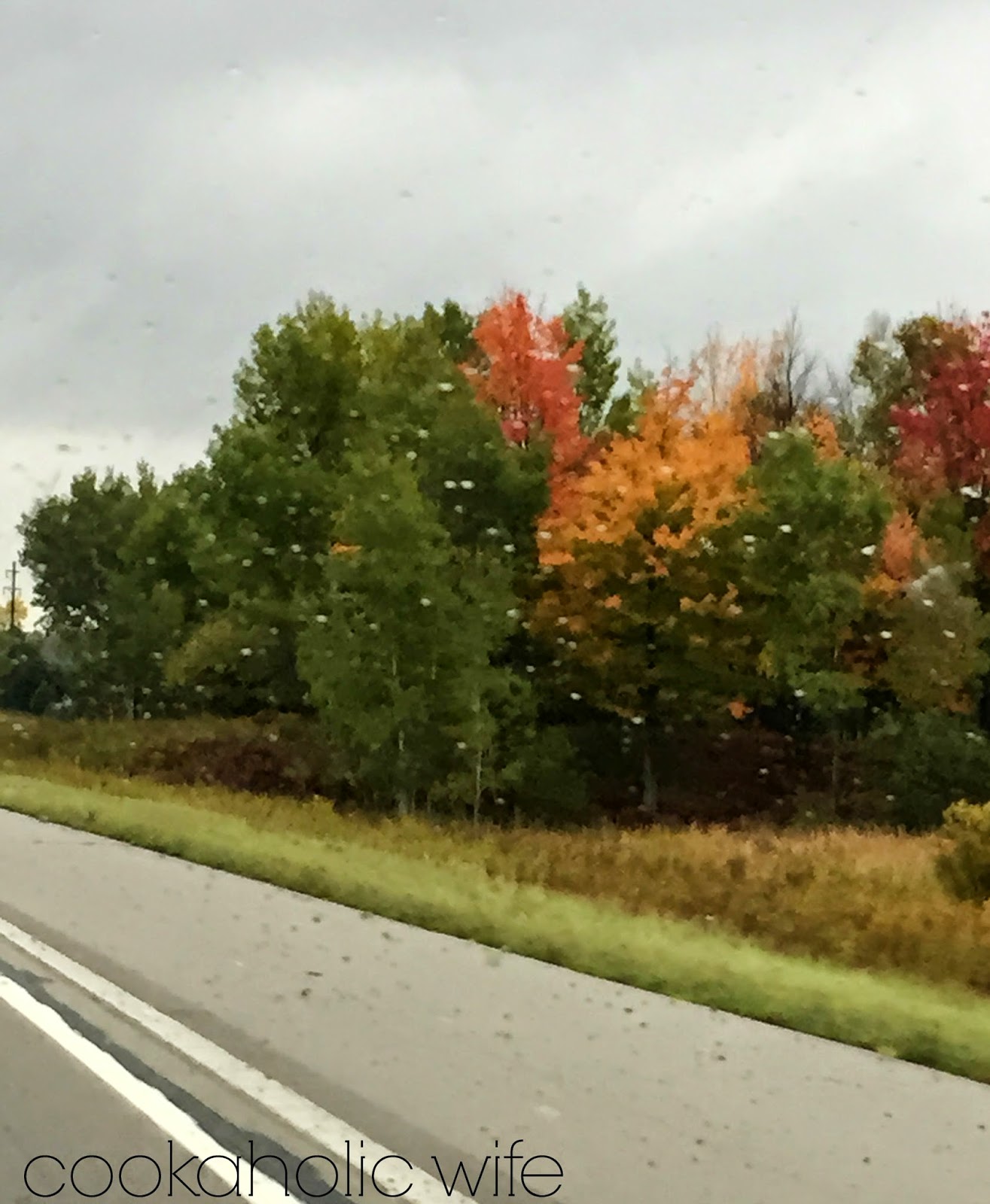 Tom drove, I took pictures. (Those are raindrops on the windshield)

They need to come to Maryland. Like now. I ordered an Orange Cooler, which is the Michigan version of an Orange Crush, using orange cream soda instead of orange juice. You need one of these in your life, let me tell you. This was followed up by a Ono Chicken burger, sans bun, which I was impressed to find they actually plated nicely for me. Along with my burger I opted for a side of their twisted mac and cheese. Tom got fries and a cinnamon-honey-sea-salt dipping sauce for me to try. Chicken = delicious. Mac and cheese = out of this freaking world. I need to find a copy of this recipe somehow. Dipping sauce = oh yeah, that is totally getting created as soon as I can. Imagining that over some waffles, dear lord. 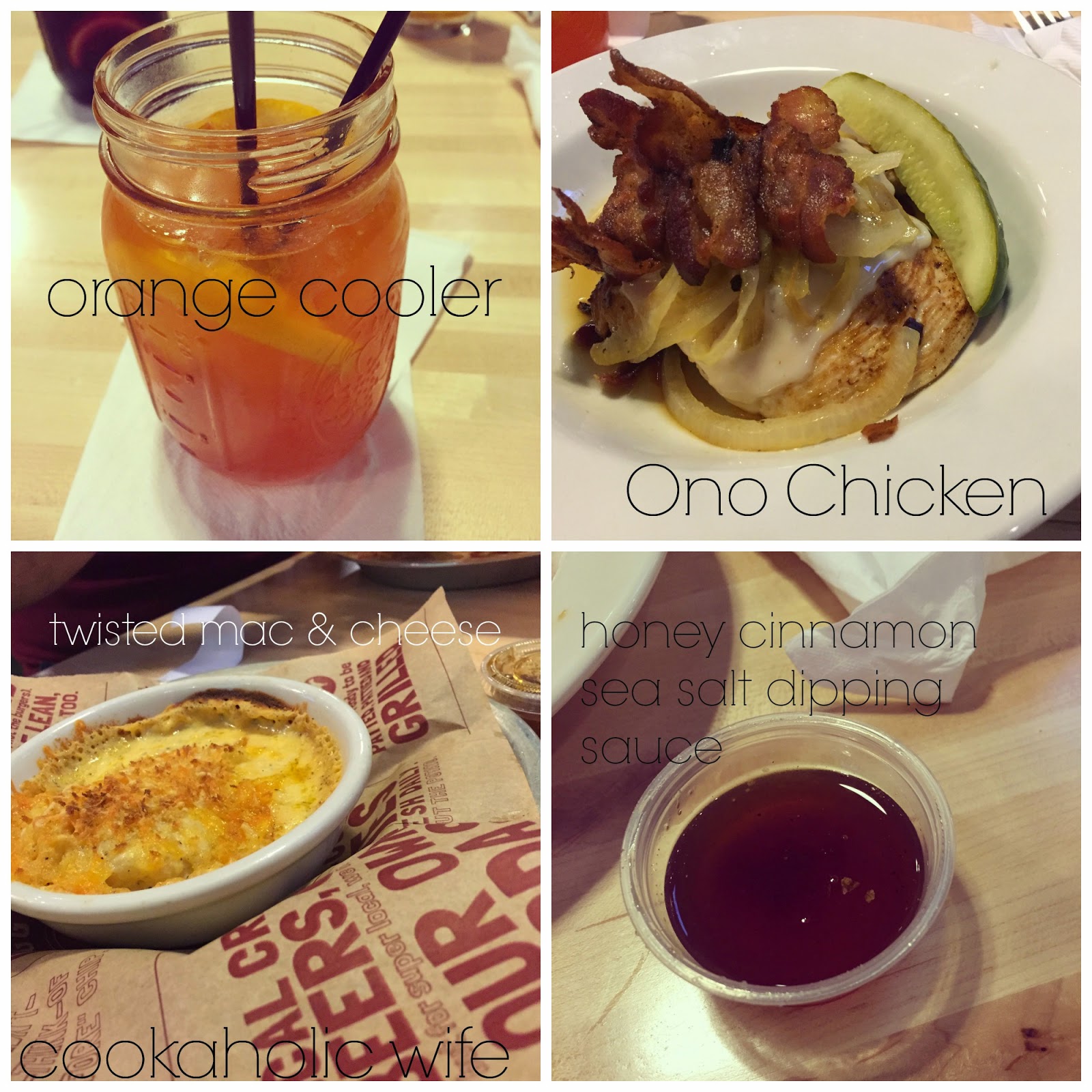 Finally we decided to head on over to our final destination for the weekend, which was Frankfort. As soon as we received the Save the Date and booked the room, I immediately looked up this little tourist town right on Lake Michigan and Lake Betsy. Google informed me of a quaint Main Street filled with your usual shops and that it was a great location.

However, at 9 PM out of season, there isn't much around. The other resort towns we drove through to get to it were even less populated, looking more like ghost towns than anything else. Anyway, we checked into the hotel and found the room to be quite nice.

Saturday morning we ventured out in the cold and the rain so I could see the water. Is it still a beach if it's on a lake? I honestly don't know. Also, I totally get why they call it the "Great" Lakes now. I mean, I had heard they were some big lakes but I was still unprepared for what was in front of me. I snapped some pics and we rushed back to the room (against the wind) to get ready for the wedding. 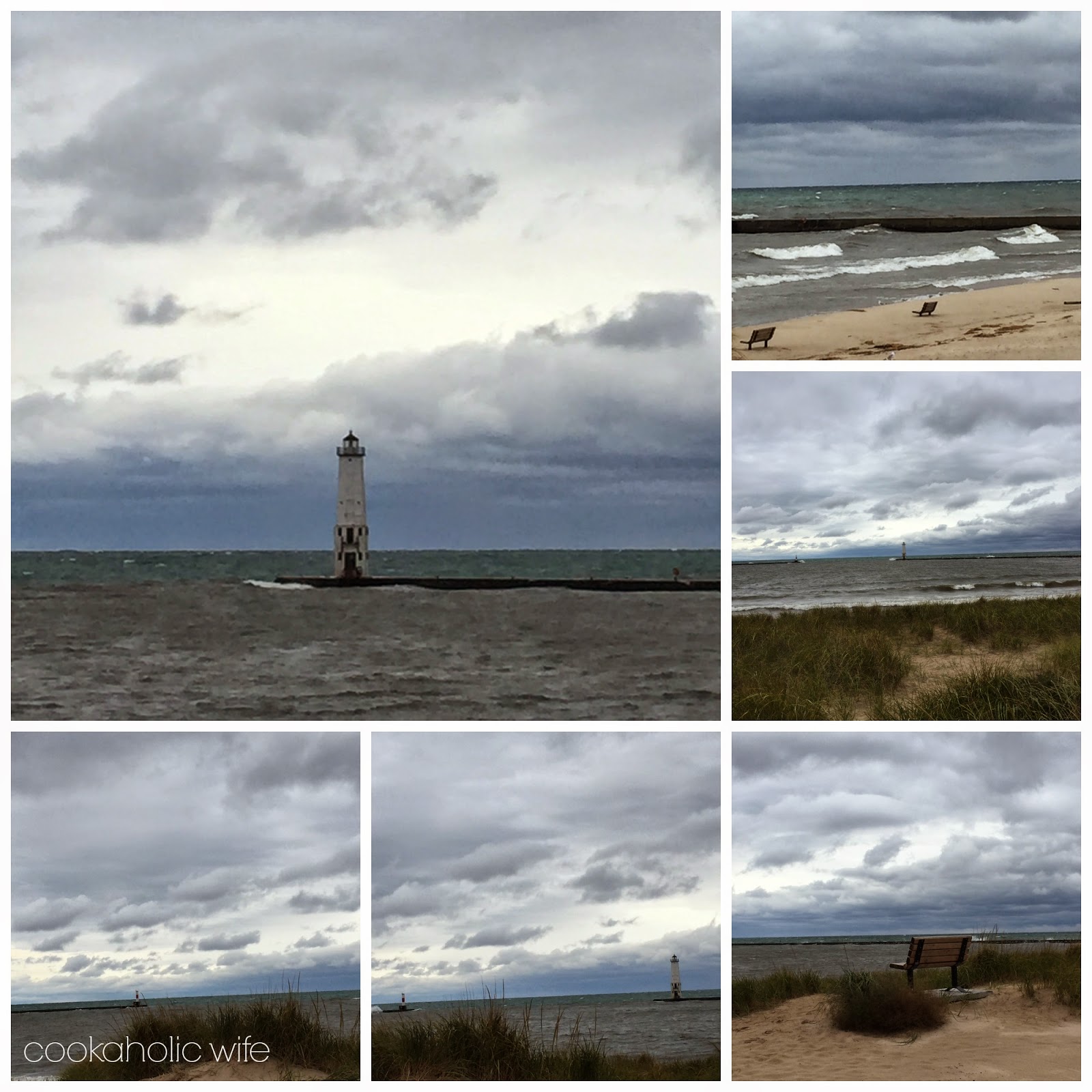 We made a quick pit stop in town at the bakery (Crescent Bakery) to grab something quick to eat. The bakery was adorable. Like right out of a Main Street movie where everyone was friendly and you wanted to spend your days there sipping your coffee kind of adorable. Oh, and the food was delicious. We split a cinnamon sugar soft pretzel, which we started to inhale too quickly for me to remember to take a picture.

Halfway to the church we kept seeing these signs for a Scenic Turnout and were wondering what it was. Then we came down this hill and the most gorgeous image of sandy beaches jutting out into the ocean surrounded by trees was in front of us. We really, really should have stopped for pictures but didn't because we were worried about the time. I managed to take these while going by. Minutes before arriving at the church the sky opened up and it began pouring. Add this to the already chilly 46 degrees with a wind chill and my phone was registering that it felt like 34 degrees. While Michigan is beautiful, it is WAY too cold of a state for me.  The church was gorgeous in that old vintage church type of way. The the ceremony was very nice and I loved her dress. (I think it was a Maggie Sottero like I wore) 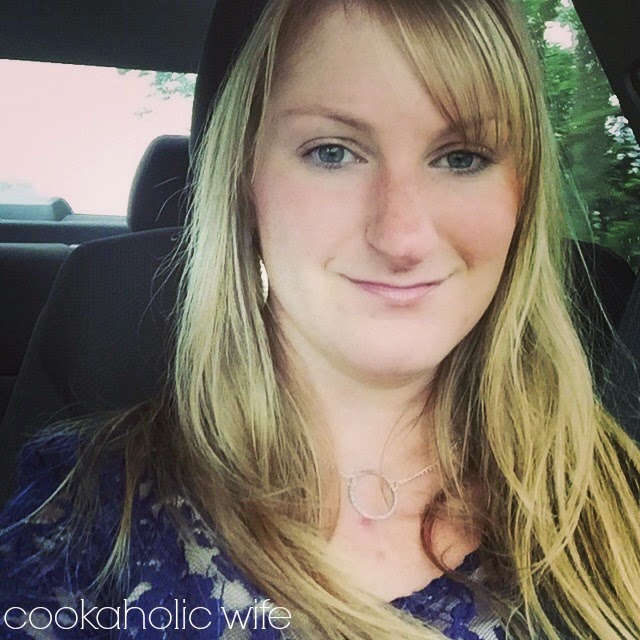 A rare picture of me.

Heading back to the hotel for a little bit before the cocktail hour and reception, I whined to Tom on the car ride home every time we passed a farm with a sign for honey crisp apples. As I've mentioned, they are by far my favorite apple and here I was in the state that created them, passing fruit right from the tree. (In the airport on the way home I found you can check bagged apples as a carry on. I may just have to plan my return trip to MI around honey crisp season.)

even more rare, pictures of Tom & I. See what happens why I try to take normal pics with him?

The reception took place at an arts hall less than a minute from our hotel. Had the weather not been chillier and pouring, I would have more than taken the opportunity to walk. The decor was simple, but really pretty. I'm jealous of the colors she used. We quickly made friends with our table mates who mostly went to college with Andrew. Then we took note of the sculpture above the head table. Which appeared to be a wooden vagina. No, I'm not kidding. Eventually someone went up to it and found that it was called "A Walk In The Woods  - What Do You See" and well, let's just say we didn't see a walk in the woods or a wooden sweet potato. Someone mentioned this to the photographer who didn't believe us then strolled over and came back with a horrified look on his face thanking us for pointing it out because he might need to do some photo-shopping in the pictures. 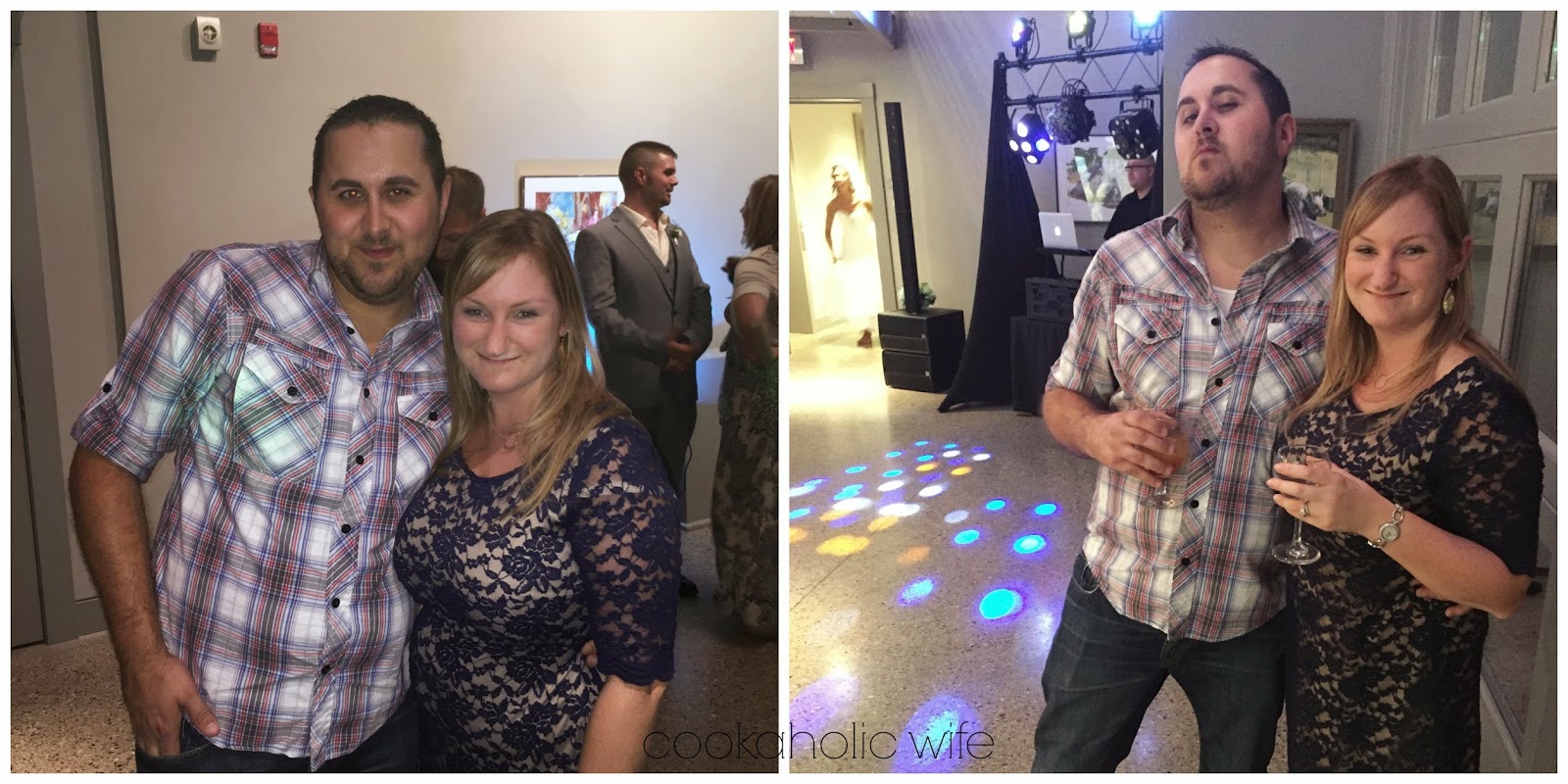 some other pics of us

After the reception we ended up in an impromptu hotel room after party with some of our table mates for a bit before we finally went to bed somewhere between 1 and 2 AM. 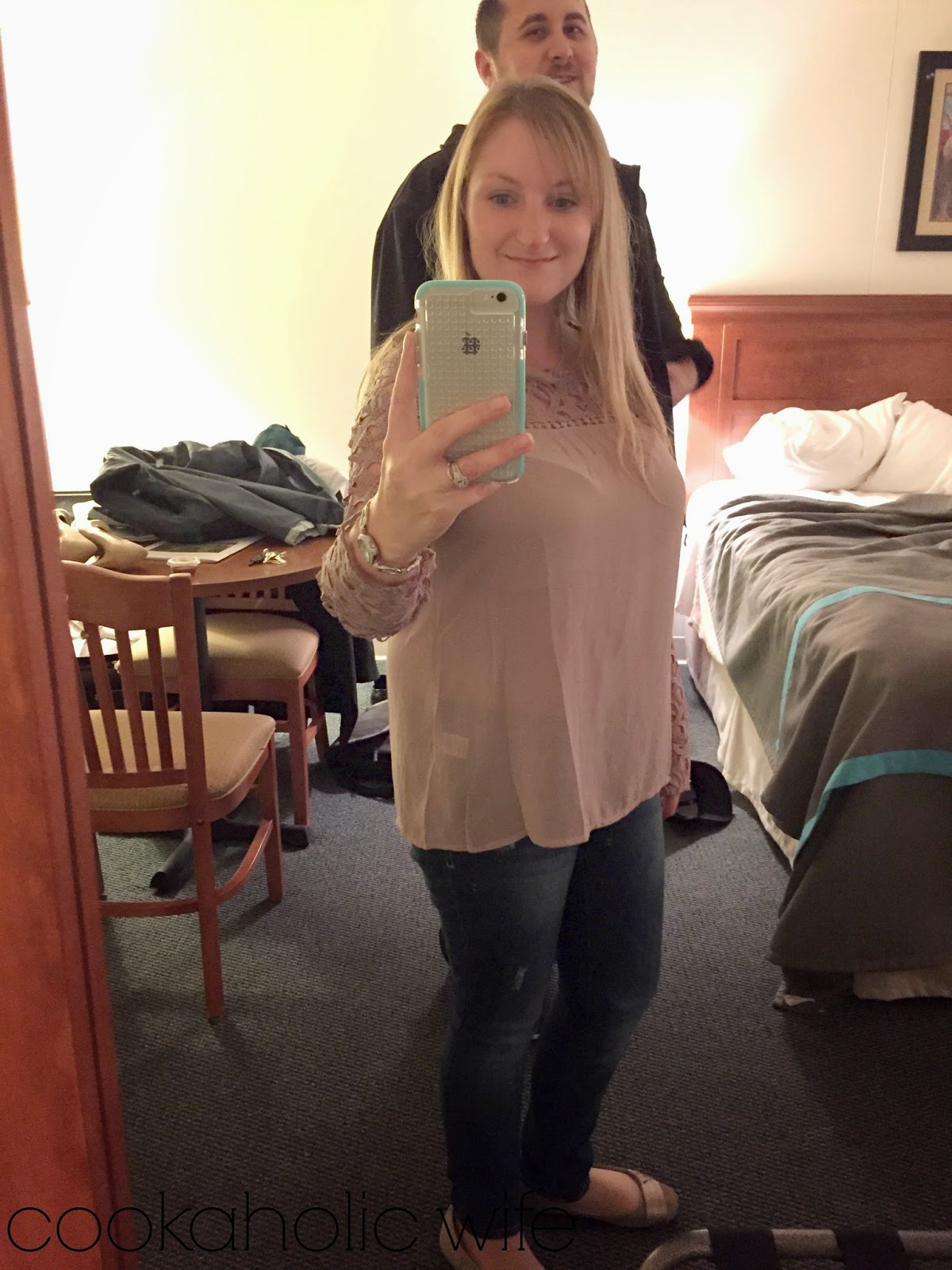 The weather still wasn't very nice on Sunday and we opted to just head back to the airport, not knowing if there would be any delays along the way. We did stop in the Crescent Bakery again for some more breakfast and I tried out one of their fall lattes. We got to the airport with 4 hours to spare but decided to just hang out there. Tom napped, I wrote fanfiction. Then our plane was delayed 15 minutes, which really turned out to be nothing at all since we only boarded 5 minutes after anticipated.

We landed, grabbed our bags and headed on home, getting home a little after 9:30 PM. Definitely not something I am used to doing. I usually live in the world of 'school nights' where I don't do anything after 4 PM on those days because I'm old. 🙂 But for a whirlwind of a weekend, we had a great time. I got to visit a new state, see some cool stuff, attend a really nice wedding, and eat some great food. Can't ask for much more than that!