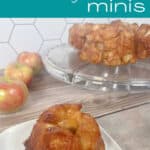 Update: This recipe was originally shared in September 2019 as part of the AppleWeek event. The recipe and photos have been updated and republished in October 2022.

I am sad to say I lived decades of my life before ever having monkeybread. Monkeybread is such an easy dessert that I'm incredibly disappointed by this, but all has been resolved with this recipe.

Monkeybread is a sticky and sweet pastry made with dough that is coated in cinnamon and sugar. The term monkey bread comes from the fact that the pastry is eaten by pulling it apart with your fingers, like how a monkey would eat. Monkey bread can be made with a homemade dough, but is commonly made using refrigerator biscuits cut into pieces for ease of preparation.

First, preheat your oven to 375. Spray a mini bundt pan with baking spray. (For a full monkeybread, double the recipe and use a regular Bundt pan)

Then coat the biscuits. Toss the biscuit pieces in cinnamon sugar and place into a large bowl.

After that add the vanilla to the remaining cinnamon sugar mixture. Stir until combined.

Then peel and dice the apple. Once diced, toss the apple pieces in the cinnamon sugar mixture, stirring to coat. Then stir into the biscuit pieces.

Spoon the mixture into the prepared mini bundt pan. Fill each cavity to ⅔ full. Pour a tablespoon of butter over each.

Bake the apple pie monkeybread minis for 25 minutes. Remove from the oven and let cool 10 minutes.

Finally, use a knife to dislodge the monkeybread from the pan. Flip out onto plates and enjoy!

Can I make monkeybread without a Bundt pan?

Absolutely! While a Bundt pan is most common, you can use a fluted pan, tube pan or even a loaf pan.

It tastes like apple pie combined with cinnamon sugar gooey bread. The outer parts of the dessert are crisp but the inside is softer, like a cinnamon roll.

Is there another name for monkeybread?

Yes, it can also be referred to as pull-apart bread or bubble bread.

With only 6 ingredients, I love how easy this recipe is to make. Especially because it uses refrigerated biscuits! If you like cinnamon rolls and apple pie, this is definitely the recipe for you, because that's exactly what it tastes like a combination of. 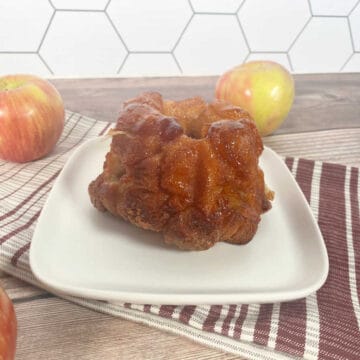 To make in a full sized Bundt pan, double the recipe and bake for 30-35 minutes, or until golden brown.