Oh my, you guys! This ice cream is out of this world. There's a local dairy that sells fresh ice cream in the summer (seriously, you can see the cows from the window) and blueberry cheesecake is one of their specialty flavors. After having it once, I knew that I needed to make my own version of it. The cheesecake aspect makes it rich but the blueberries provide just enough sweetness to give it a balanced flavor. And the graham cracker crumbs... 😍 Seriously. I looked at a bunch of recipes and realized that pretty much no cheesecake ice cream included them. Why?! It's what makes cheesecake, cheesecake! So I knew my version was including them no matter what. They give a great little crunch to the ice cream. Personally, I think it's most delicious served on a waffle cone, but chose your cone or bowl of choice.

CAN I MAKE BLUEBERRY CHEESECAKE ICE CREAM WITHOUT AN ICE CREAM MAKER?

Yep! This recipe is actually a no-churn recipe. I'd say it's because I prefer them, but the honest answer is I'm lazy and never remember to put the ice cream attachment to my Kitchenaid Mixer into the freezer. So if I'm making ice cream, it's always a no churn version.

You do need a mixer, either handheld or a stand one to mix up the ice cream base. Unless you have some really awesome arm muscles and can turn it into a thick whipped cream on your own. And if you can, can we talk? I could work on my arm exercise routine. 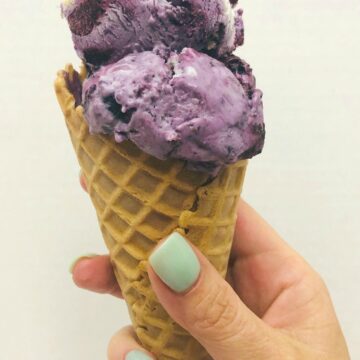