Over the years I've spent in the kitchen, I've learned which brands of kitchen tools I like to use and which ones I don't mind passing on to others. Last year I was introduced to the KitchenIQ V-Etched Better Zester and within a few seconds I packed up the two other zesters in the drawer and made this the only one allowed in the kitchen. 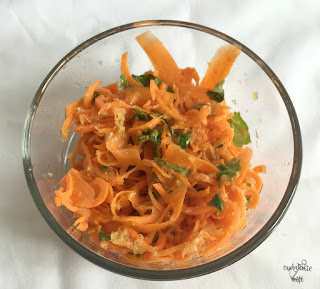 When I found out KitchenIQ was looking for bloggers to use some of their new products, I signed up right away, extremely curious to know what they were going to send me.

In addition to another V-Etched Better Zester, I also received a Grate Ginger Tool and a V-Etched Spice Grater. 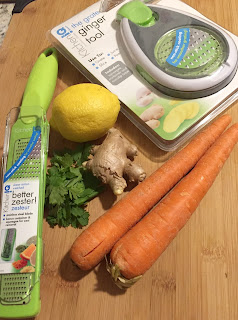 Disclaimer: I received three complimentary products from KitchenIQ for the purpose of a review. Receipt of the product has no influence on my review. All thoughts are my own. No further compensation was received.

I used to not be a fan of ginger. I thought the powdered version had an odd after taste, that the pickled version that comes along with your plate of sushi was disgusting and that fresh ginger had a spicy kick to it that I was simply "weird". And then somewhere along the way, my taste buds changed and now I actively seek out ginger in all forms, even going as far as to make my own ginger simple syrup. (I'll share that recipe eventually...)

I thought about what type of recipes I could make with the tools that we were given. Ginger, was an obvious choice, as was the zest of something. Lemon pairs so nicely with ginger I decided that going much further out side of the box of pairings was not needed and I could easily find a recipe including both of those ingredients. 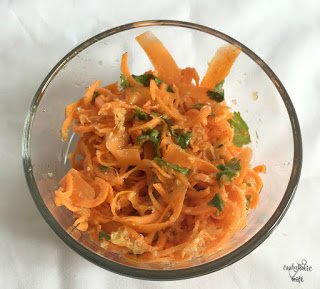 Raw carrots have been one of my favorite vegetables to eat for as far back as I can remember. Spiralizing them is not as easy as one would imagine, so I completely understand if you go the easier route and simply peel them into ribbons.

The lemon zest and juice brighten up the dish and the spicy kick of the fresh ginger compliments so nicely against the sweetness of the carrot. I could easily eat this salad every day. It whips up in no time at all and is sure to please any crowd of people you serve it to.

What fun is talking about kitchen tools if you don't have the option to win them? The awesome people at KitchenIQ are willing to give away the same tools I received.