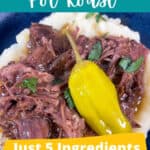 Mississippi Pot Roast is a super flavorful pot roast made with only a handful of ingredients in the slow cooker. You'll love the tangy taste of the pepperoncinis.

Update: The original recipe was posted in October 2017. The recipe and photos have been updated and republished in February 2022.

I cannot believe I existed over 30 years of life without ever having this delicious and easy pot roast. The first time I made the recipe was for a blogging event where pickled peppers was the theme. I had no idea what to make and started searching for recipes. Since making this the first time, this recipe quickly became part of our regular dinners.

What is Mississippi Pot Roast

Mississippi Pot Roast is one of the easiest slow cooker recipes you'll ever make. A beef roast is seasoned with flavor packets and the juice from pepperoncinis before being cooked long and slow in the slow cooker. It's a little bit tangy and perfectly delicious.

It's very similar to my Crock Pot Italian Beef Sandwiches.

Start off by seasoning the beef roast. Season all sides of the roast liberally with salt and pepper. Then add olive oil to a large skillet over medium high heat. Add the roast and cook for 4-5 minutes on each side until browned.

Then add your ingredients to the slow cooker. Place the browned roast into the slow cooker. Sprinkle the Ranch dressing mix and Au Jus Gravy Mix on top. Slice butter into pieces and place on top. Then add in pepperoncini's and their juice.

Next, cook the pot roast. Cook on low for 8-10 hours, then shred the beef and return to the slow cooker to soak up the juices again.

Why is my Mississippi Pot Roast tough?

You may not have cooked it long enough. This is a great recipe to throw in the slow cooker early in the morning and let cook all day as it needs time to cook down and become tender.

What cut of beef do I use for pot roast?

Chuck roast is a great choice. If you need to use top or bottom round or rump roast, make sure you cook at least 10 hours to ensure the meat is not tough.

Do you use whole or shredded pepperoncini's in Mississippi Pot Roast?

That's entirely up to you! I have used both depending on what we had on hand. 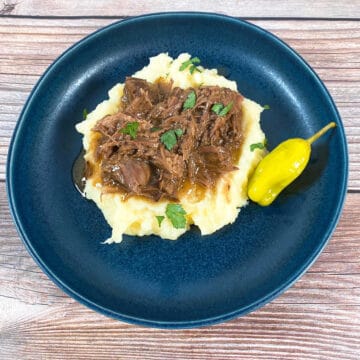 *The water can be replaced with juice from the pepperoncini jar to make the flavor stronger. Adding additional sliced pepperoncini on top after serving also enhances the flavor.