When I decided to host December's #FoodieExtravaganza, I knew I wanted the theme to be eggnog.

Posting day for #FoodieExtravaganza is always the first Wednesday of each month. If you are a blogger and would like to join our group and blog along with us, come join our Facebook page Foodie Extravaganza. We would love to have you! If you're a spectator looking for delicious tid-bits check out our Foodie Extravaganza Pinterest Board! Looking for our previous parties? Check them out HERE. 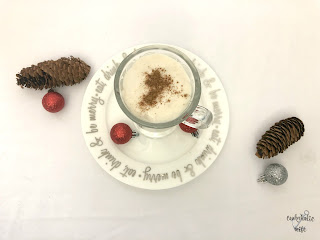 When I was a kid, I thought eggnog was completely gross. Actually, I thought most things involving eggs was gross. I clearly remember an episode of Doogie Howser where he made a smoothie and put a raw egg in it. I've cringed at the thought of drinking eggs ever since.

But as an adult, I found that I really, really like eggnog. Of course, this would be followed up by becoming lactose intolerant. At least there are alternatives to eggnog, one of which I decided to share with you today. 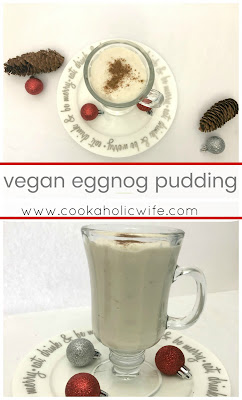 Keyword eggnog, pudding, vegan
Did you make this? I want to see, soMention @CookaholicWife or tag #cookaholicwife! 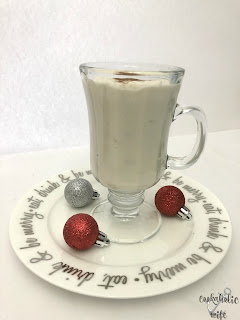 I initially started looking for dairy-free eggnog recipes and ended up finding something online that said you could create the thickness of eggnog by using instant pudding. I then realized I'd never heard of eggnog pudding and if there was ever a time to try it out, this was it!

As this uses canned coconut milk, the coconut flavor is still there, but you can adjust the spices as needed to create a more cinnamon-like version if that is what you prefer. 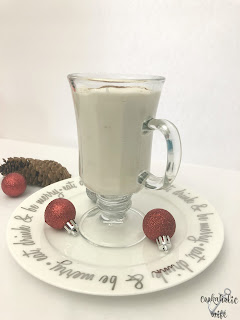 *Also, I know some vegan people who won't eat instant pudding because while there is not dairy in the ingredients, there's also very little that's pronounceable. So, I won't at all be offended if you're vegan and refuse to even consider this a vegan recipe. 😀 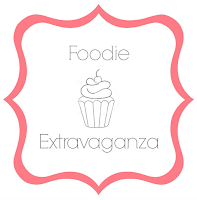