Fried Green Tomatoes are a classic Southern side dish, made using unripe tomatoes. Battered and fried, they're served with ranch dressing or remoulade sauce for dipping.

Update: This post was originally shared in January 2016. In January 2021 it was republished with new photos and an improved recipe.

All of the fresh produce in the summer makes me so happy. Corn, peaches, cherries, cucumber, zucchini and tomatoes make a rotation into our meals at least once a week.

Marylander's are a tad bit snobby when it comes to our tomatoes. There is just something about a locally grown Maryland tomato that tastes so much better than anything you can buy from the grocery store. Does every state feel this way about their local produce?

For years "Fried Green Tomatoes" was nothing more than the title of a movie to me, but once I tried them, that changed. If you're impatiently waiting for some tomatoes to ripen, why not skip the wait and fry them up instead?

So what are fried green tomatoes anyway?

A fried green tomato is just an unripe tomato that has been battered and fried. They're a popular dish in the southern states, most notably Georgia where the movie was filmed and the Whistle Stop Cafe exists.

As for taste, they are really mild. A ripe tomato is going to be juicy and bursting with flavor. An unripe tomato would instead be firmer with less developed flavor, which allows them to handle the heat of being fried. If you've ever had pickles or zucchini that has been fried in a cornmeal batter, the texture is pretty similar.

What dipping sauce do you use?

Ranch dressing is commonly served as a dipping sauce for fried green tomatoes, but remoulade is a close second. Remoulade is a French style sauce that can be pretty spicy depending on how you make it. As the tomatoes are pretty bland on their own, you're going to want a dressing or sauce that packs a punch of flavor and pairs well with the tomatoes.

Can you reheat them?

Surprisingly, yes! You can reheat them in a skillet, in the toaster oven or in the air fryer. But first, let's talk about how to store them after they're fried. Drain all excess oil on a paper towel directly after frying. Once completely cooled, transfer to a container with a lid. They'll keep in the fridge for 2-3 days.

Skillet Preparation: heat over medium high heat with no oil. Cook tomatoes 1-2 minutes per side.

Toaster Oven Preparation: place the tomatoes on the rack and use the toast or bake setting for 2-4 minutes. Reheating times vary based off your particular toaster oven, so keep an eye on it and once the tomatoes are warmed and feel crisp again, you're good to go.

how to make fried green tomatoes 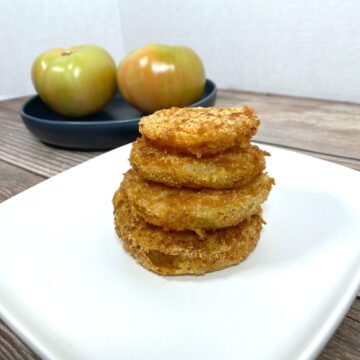