It really says something about a recipe when you have to make it three times and only on the third try can you get a semi decent picture before there are hands flying from all directions to scarf these down.

If that isn't incentive to make these, I don't know what is.

I debated on making them again, when I wasn't having a party or anything and thought my chances of a decent picture would be higher, but then I realized these are just to dangerous to keep around, even in small quantities.

That is the problem with sliders. You think "oh, portion control!" but then after you scarf one of these down in two or three bites and realize how incredibly delicious it was, you think "well, sliders are small. It's not like I had a whole sandwich, so its justified to eat another...and another...Damn it, I just ate 5 of them."

Hey, at least I warned you. 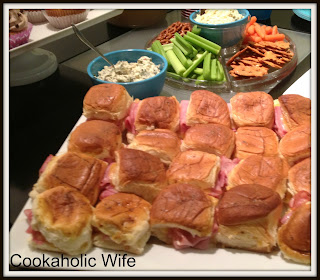 Ham and Cheese Sliders
Source: Sweet Beginnings from The Girl Who Ate Everything
Servings: 24
Printer Friendly

Directions:
1. Preheat oven to 350. Line a large baking sheet with foil.
2. Slice sweet rolls in half and spread mayo on both sides.
3. Cut each slice of Swiss cheese into quarters and place one on top and and one of the bottom of each roll. Fold up 1-2 pieces of ham and place on the slider.
4. Close the rolls and make sure they are placed tightly together on the baking sheet.
5. Combine the butter, mustard, poppy seeds, onion powder and Worcestershire together in a small bowl. Brush on top of the sliders and let sit for 10 minutes.
6. Cover with foil and bake for 12 minutes, then remove the foil and bake for 2 more minutes. Serve warm.

The sandwiches, before the glaze, can be prepared up to a day in advance as long as they are tightly covered.
I really just have no words for these sliders, other than you must make them. They're just incredible. And they've definitely become my go-to recipe for a crowd since they're not only delicious but super easy to make and quick!