Steamed Shrimp Po Boy Sandwiches are a lighter, Maryland take on the classic sandwich. Seasoned shrimp is steamed and served on roll with lettuce, tomato, dill pickles and remoulade sauce.

In addition to steamed crabs, Maryland is also known for our steamed shrimp. In other places this is sometimes called "peel and eat shrimp". The shrimp is steamed with apple cider vinegar, water and of course, Old Bay seasoning.

During our visit to New Orleans, a shrimp po' boy was high up on the list of meals to try and it ended up being the first meal I had there. Of course, we followed it up with beignets and a lot fo walking around the French Quarter.

What is a steamed shrimp po' boy sandwich?

A po' boy, or poor boy, is a Louisana sandwich generally made with fried seafood or roast beef. The sandwich is served on a bread similar to a French baguette. A "dressed" sandwich means it has lettuce, tomato, dill pickles and remoulade sauce. Instead of using Cajun or Creole seasoning and frying the shrimp, I added a little Maryland flair by seasoned the shrimp with Old Bay and steamed them.

Check out some of my other New Orleans recipes: 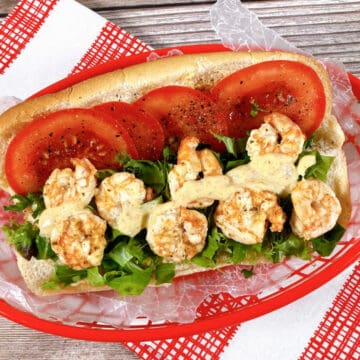 Club, sub and hot dog rolls all work for this sandwich, as do French baguettes. Additional Old Bay can be added to the shrimp after they're steamed if enough of it didn't stick to them during the cooking process.