Creole Style Jambalaya is a flavorful dish made with chicken, sausage and shrimp mixed with rice, tomatoes, celery, onion and green pepper.

Update: This recipe was originally shared in April 2013. The recipe and photos have been improved and republished in May 2021.

When we visited New Orleans a few years ago, I was most excited to try all of their foods, with Jambalaya being one dish that I absolutely had to try.

What's the difference between Cajun and Creole Style jambalaya?

Jambalaya is both a Cajun and Creole dish. The Creole version has a reddish hue from the tomatoes that are used and shrimp may or may not be included. This version is cooked over time, browning the meats, caramelizing the onions and sweating in the other vegetables before the tomatoes and rice are added.

The Cajun version has a brown hue because it does not include tomatoes. The Cajun version is often more of a "dump and go" recipe where all of the ingredients are added to a pot and cooked together, vs. layering in the flavors like the Creole version does.

But no matter which version you make, jambalaya is a delicious dish! 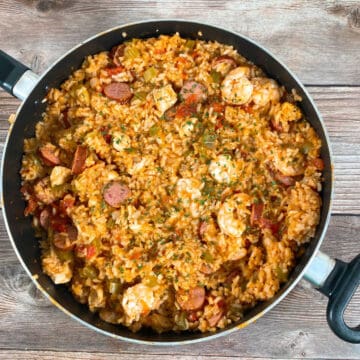 Substitutions: andouille sausage can be replaced with any smoked sausage. 28 oz. crushed tomatoes can replace the tomato sauce and canned tomatoes, you may need to cook the recipe a few minutes longer. Red, yellow or orange bell peppers can be used instead of green. You can always add more Cajun seasoning, but you can't take it away. Taste test after you add in the seasonings and the rice has boiled to see if you need more. Alternately, add hot sauce to the finished recipe if you'd like it spicier.