A local winery has tasting every Sunday afternoon and last year two friends and I went a few times to try out their different wines. During one of the visits, we tasted wassail which was explained to us as a spiced red wine. The second we tasted it, everyone said it tasted just like Christmas.

Last weekend I had a holiday party and both of those friends were in attendance. When I was creating the menu, I wanted to find a few drink recipes that I could have made up for everyone to enjoy. I was browsing around on the internet and found a few recipes for wassail. But finding one that used wine was not an easy task so I ended up just creating my own recipe after reading a bunch of others.

While not the main ingredients, the cranberry and orange juice meant I could use this recipe for the Improv Challenge this month, seeing as orange and cranberry were the chosen ingredients. I actually found a ton of recipes I want to make using these ingredients, but this one ended up fitting in the time frame perfectly. 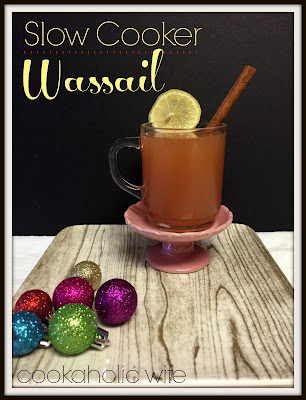 3. Cook on high for 1 hour, then discard the cinnamon sticks and reduce to the Keep Warm setting. Serve in glasses with remaining lemon slices as garnish. 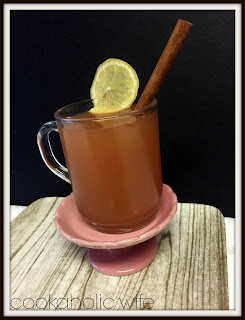 This is not as red as it should be. Mainly because the bottle of red wine that had been collecting dust on the shelf was actually a bottle of blush wine. And it was too late to make a run to the liquor store for anything else. I was worried it would make this too sweet, but it didn't.