Mediterranean Chicken Gyro is marinated chicken breast served in a pita with cucumbers, tomatoes and a tzatziki sauce with sumac spice.

I am so excited! I planted a few cucumber seeds a few weeks ago and fully expected nothing to happen, because I'm not exactly good at this kind of stuff. But I went outside the other day and the seeds have sprouted! There's a chance I'm going to have cucumbers!

Okay, that aside, let's talk about this delicious Mediterranean Chicken Gyro. Greek food is not super high up on my favorites list, but I love, love, love tzatziki sauce! Combine that with some marinated chicken and put it all in a pita with cucumbers, tomatoes and a tzatziki sauce with sumac spice? That's delicious!

What is a chicken gyro?

In Greece, gyros are commonly made with pork, chicken, lamb or beef. The meat is cooked on a spit and it's served in pita bread with veggies like cucumbers, tomatoes and green peppers. The sauce for a gyro is tzatziki sauce.

Substitutions for this recipe 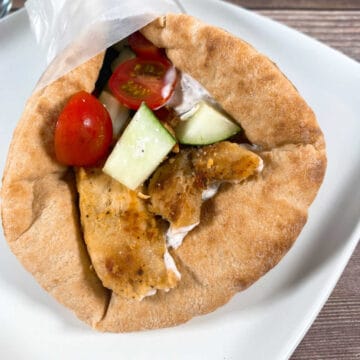 Instead of grilling the chicken, it can be cooked in the oven for 20-25 minutes at 350.  Replace Greek yogurt with sour cream if you prefer.  Add slices of green pepper or red onion for more vegetables in the gyro.

Keyword chicken and tzatziki, chicken gyro, greek chicken, mediterranean chicken
Did you make this? I want to see, soMention @CookaholicWife or tag #cookaholicwife!