For months now I've wanted something rich and chocolate-y but nothing has managed to satisfy that craving until I made these brownies.

You really can't go wrong with a homemade brownie with a hint of spiciness from the cayenne pepper.

I actually made these in time to share with you for Cinco de Mayo but I never got around to actually blogging them before that. And there went my streak of having holiday foods ready for you before the holidays! 🙁 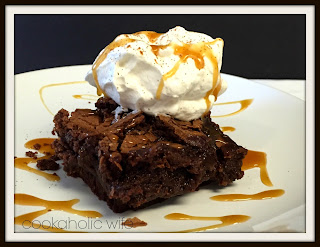 Ingredients:
for the brownies:

Directions:
1. Preheat the oven to 325. Line a 9x13 baking dish with foil, leaving extra to hang over the sides. Spray the foil with non-stick cooking spray.
2. In a medium saucepan, add the chopped chocolates and butter. Stir frequently until both are completely melted and no lumps remain. Remove from the heat and whisk in the brown sugar and sugar until no lumps remain.
3. Whisk in the eggs, vanilla and almond extract until combined. Slowly add in the flour until combined, then add in the cinnamon, salt and cayenne. Stir until the batter is smooth.
4. Pour into the prepared baking dish and bake for 35 to 40 minutes or until a toothpick inserted in the center comes out clean.
5. Transfer to a wire rack to allow to cool.
6. Prepare the whipped cream by beating heavy cream and sugar in the bowl of your stand mixer until soft peaks form. Add in the cayenne pepper and stir until just combined.
7. Use the overhanging foil to remove the brownies from the pan. Cut into squares.
8. Serve, topped with whipped cream and any additional toppings. 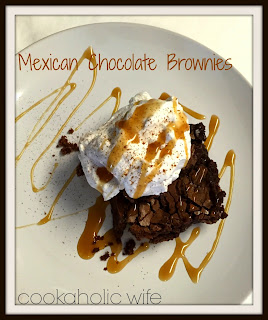 The original recipe calls for baking this into a 8x8 baking dish for 30 minutes. I initially poured the batter into the dish and realized these were going to be very, very thick brownies and there was absolutely no way they were going to cook in 30 minutes. Instead of baking them for an hour or more, I transferred the batter to a 9x13 dish and baked them for 40 minutes to ensure the center was cooked through. (At 35 minutes in my oven it was barely gooey.)

I served these brownies with a caramel sauce only because we didn't have vanilla ice cream on hand to add to them as well.

The semi-sweet and unsweetened chocolate totally hit that rich, chocolate-y craving I had!