I am a creature of habit when it comes to drinks. I drink coffee in the morning, water throughout the day and iced green tea at night. Sometimes, but not often, the coffee will be replaced for hot chocolate or the tea for lemonade or soda. It never occurs to me to drink juice 99% of the time. Mostly because I don't see the point in drinking away your calories for the day, but also because I'm pretty picky about juice.

Apple juice is fine. Orange juice, on the other hand, I can typically only have in very small quantities. See, one night during the summer after I graduated from high school, I went to a party with some friends and spent the night with a bottle of vodka and a bottle of orange juice. It took me many, many years to even be able to stomach the slight, let alone the smell of orange juice again.

Anyway, the point to all of this is, we were having people over one day and I decided to finally stray away from the typical beverages I would serve and create a fruit punch. 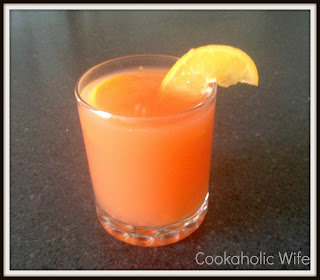 Directions:
1. Combine the ginger ale, orange juice, pineapples and juice and maraschino cherries with juice together into a large pitcher.
2. Slice the lemon in half. Squeeze half of the juice from the lemon into the pitcher. Slice the other half of the lemon and and add to the pitcher along with the orange slices.
4. Refrigerate for 1 hour or serve immediately with ice.

I created this with what was leftover in the fridge from previous drinks and recipes and I think it turned out rather well. Its definitely sweet and fruity, but the carbonation of the ginger ale provides a nice zing to the punch.

However, I do need to take up an issue with Seagram's Ginger Ale. On Christmas, I opened a bottle of their ginger ale that had been standing up straight on our kitchen floor for 2 days. It exploded all over me. Then, while making this punch, I opened another bottle that hadn't been touched in days and the same thing happened. While I like ginger ale, I really don't appreciate taking a bath in it.