Recipe Remake: I originally posted this recipe as part of an Improv Challenge back in May of 2013 where the two ingredients for the month were cinnamon and sugar. I decided to remake this dessert when one of my coworkers told me that he didn't think he was a fan of cream cheese in sweet dishes. Considering sweetened cream cheese ranks really high at the top of my must-have list for desserts, I knew I needed to try and change his mind. 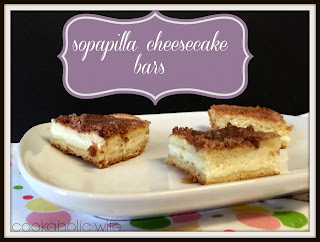 I did not make any changes to this recipe, I just wanted to update the picture and convince my coworker that sweetened cream cheese is a necessity for life. 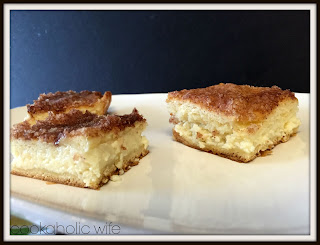 Original Post: I am quite embarrassed to admit that I only heard of sopapilla a few years ago. This is particularly embarrassing because it is commonly made here into a cheesecake bar form. Cheesecake made with cream cheese, sugar and vanilla extract. As in, like my favorite combination ever. How I managed to let a dessert made with my favorite ingredients slip past me for so long is just blasphemy, but at long last, I can now say that I have partook in the wonderful deliciousness of sopapilla.

The ingredients for this month's challenge are cinnamon and sugar. I realize these aren't the star ingredients in the sopapilla cheesecake bars, however, they do provide the topping and since I had planned to make the sopapilla regardless, it only made sense to use it for my challenge recipe.

Now, if you are one of those people really concerned about how you are going to look in a bathing suit in a few months, I sadly must say, this is not the recipe for you. It is one of those recipes that would make Paula Deen proud considering it involves "A stick of butter, y'all!" So uh, just keep that in mind. 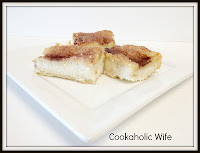 Directions:
1. Preheat the oven to 350. Spray a 9x13 baking dish with cooking spray.
2. Combine the cream cheese, 1 cup of sugar and vanilla in the bowl of your stand mixer and beat on medium speed until light and fluffy.
3. Meanwhile, press one can of the crescent dough into the prepared baking dish, making sure to pinch together all of the triangles to form a smooth sheet.
4. Spread the cream cheese mixture evenly over the crescent dough and then top with the remaining can of crescent dough, also pinching the seams together to form a smooth sheet.
5. Pour the melted butter over the crescent roll.
6. Stir together the remaining ½ cup of sugar and the cinnamon. Sprinkle over the melted butter.
7. Bake for 30 minutes then let cool to room temperature. Refrigerate for at least 1 hour and cut into 12 bars. Serve cold or warmed in the microwave for 5-10 seconds.

Would you believe me if I told you that I think this is the most incredible dessert ever and it may just become your new favorite? You should, because I am pretty sure that it is mine. Which means that I like it more than creme brulee...yeah, I can confidently say that. 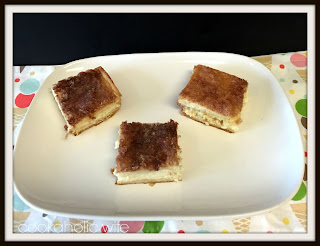 Recipe Remake Update: Mission complete! And successful! My coworker loved these and is now on board with any sweetened cream cheese recipe I might bring in.