×
As I mentioned last week, I was overloaded with rather ripe fruit and no real plan in sight to make it go away. My mom gave me nearly three cups of watermelon. I ate as much of it as I could, but even though it was one of the few things I could eat at the time, I was getting tired of it.

Watermelon is definitely not something I think of to use in a smoothie, but I was out of ideas and decided that good old Pinterest could easily swoop in and save the day. I typed in “watermelon smoothie” and the first one that came up showed watermelon and strawberries.

Sold! I didn’t even bother to click the link and read the recipe, I just went directly to the kitchen and pulled out my trusty Vitamix. 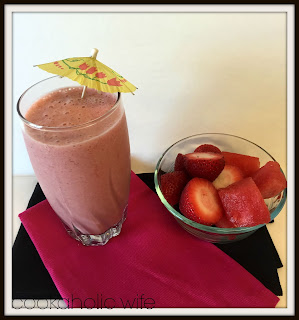 Directions:
1. Add all ingredients to a blender and blend until smooth. 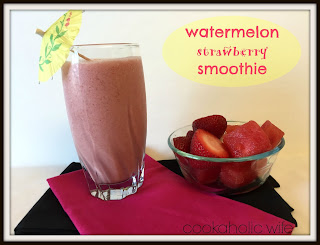 I realized after I named the photo and started typing out the recipe that there isn’t much to make this a smoothie. Typically a smoothie includes some form of dairy, whether it’s milk or yogurt. This is just fruit, honey and water. So it’s a…frozen fruit drink? I dunno.